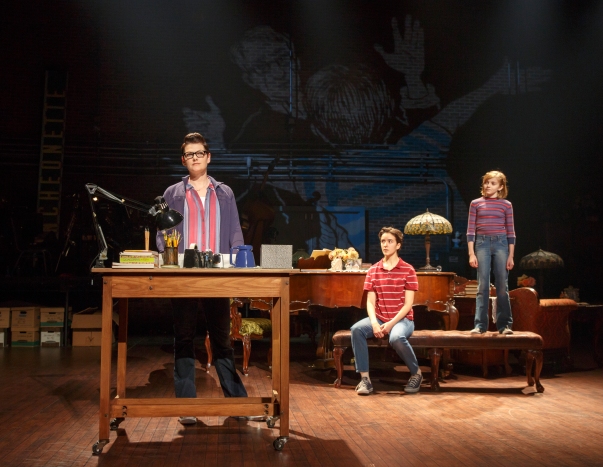 Every show that wins a Tony Award for Best Play or Best Musical doesn’t necessarily bowl me over when I head to New York to critique it. Fun Home was one winner that proved itself worthy of all its accolades – five Tonys – and more. The biggest differences between that Broadway production and the current touring version in Charlotte are Knight Theater and Charlotte native Abby Corrigan.

Tightly adapted by Lisa Kron from Alison Bechdel’s autobiographical graphic novel, with an exceptionally varied and emotional score by Kroon and Jeanine Tesori, Fun Home revolves around two complex characters: Alison and her troubled, multi-faceted dad. Bruce is a charismatic English teacher, a visual artist, a restorer of dilapidated houses, a connoisseur of antiques, and owner of the family business, the Bechdels’ funeral home. On the other side of the ledger, Alison’s dad is a neatness-and-control freak.

He’s also a closeted homosexual who preys on underage boys, not above taking advantage of his own students.

So while Alison, played by a succession of three actors, is on a path to discovering her own gay sexuality and becoming a cartoonist, she’s also on a collision course with the truth about her father. Bruce, the meticulous and domineering dad, is on a more fearsome path – to isolation, self-loathing, and suicide. 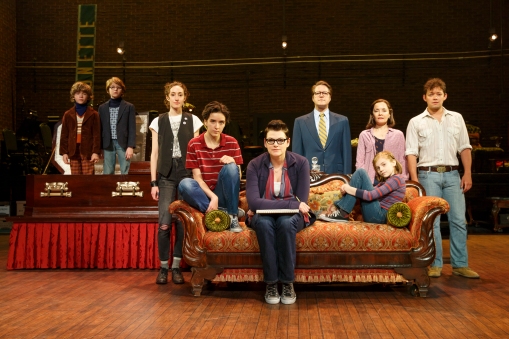 Mostly used for symphony and dance, Knight Theater is probably the best place in town for replicating the Broadway musical experience, markedly better than Belk Theater. But Fun Home wasn’t at a typical Broadway theater for its New York run. At Circle in the Square, the audience surrounded the stage, and when Alison and her two brothers sang “Come to the Fun Home,” a singing advertisement for the funeral home that is the antithesis of solemnity, the three siblings seemed to explode out towards us.

At the Knight, all the action is flattened, and the Bechdel kids merely circle around each other. David Zinn’s scenic pieces seem disappointingly unchanged at first, two-dimensional and cramped on the Knight stage, but during the latter half of the show (there’s no intermission), Zinn exploits the resources of a proscenium stage. Medium Allison’s homecoming becomes more of an event when we see the funeral parlor again.

Corrigan plays the pivotal Middle Allison, flanked by tomboyish Carly Gold as Small Alison and Kate Shindle as the mature, emphatically butch Alison who narrates, often with sketchpad in hand. Gold is every bit as exuberant and appealing as her Broadway counterpart, but it’s Shindle who brings new life – and heartache – to our narrator with a more powerful, penetrating voice.

While both Small Allison and mature Allison are recognizably in the same Broadway mold that won director Sam Gold his Tony Award, Corrigan strikes me as a notably different transitional figure between her younger and older selves. On Broadway, Emily Skeggs leaned more toward the sunny exuberance of Small Allison grown to college age. Corrigan is more of an awkward foreshadowing of the comparatively subdued and serious elder Allison.

As a result, when Medium Allison quickly succumbs to the attractions of Joan and liberates her lesbian leanings, Corrigan gets the same comedy mileage from her anthemic “I’m changing my major to Joan,” but with less raucous exuberance in her delivery. There’s more in-the-moment pragmatism to Corrigan’s take, as if she’s afraid of waking the object of her adoration as she lies sleeping on her bed – or just afraid of breaking an unbelievable magic spell. It’s very effective, and theatergoers seeing Fun Home for the first time will find it hard to imagine “Changing My Major” sung any other way.

With the three touring Allisons more than holding their own versus the original Broadway cast, there’s a further gravitational shift when Robert Petkoff as Bruce doesn’t match the bigger-than-life dimensions of Tony winner Michael Carveris. Amplitude is the difference with Petkoff, not detail, for he expertly navigates all the twists and turns of Bruce’s complexity. In a way, this is beneficial, for the importance of his character and Allison’s development are more evenly balanced on tour.

Further diluting Bruce’s dominance is the steely performance of Susan Moniz as his stoical wife, Helen. It was Moniz who opened my eyes to the Chekhovian dimensions of Kron’s book, for her silences were the first that spoke loudly to me on opening night, and her “Days and Days” had a martyred nobility. Moments later in the show, silence is very much the point when Alison is alone with Bruce in their climactic confrontation, where Shindle suddenly shifts from narrator to actor in the devastating “Telephone Wire” drive.

As Joan, Kally Duling seduces with a self-confident swagger, and Zinn’s costume design underlines her casual sophistication. But Duling never gets a solo, either to comment on Alison or the Bechdels. That’s symptomatic of the only problem I have with the show. Clocking in at 92 minutes on Tuesday, Kron’s script is too tight. It needs to breathe more, maybe as far as – danger ahead! – examining Alison’s feelings about her dad more closely. Yet there’s no denying that Fun Home is truly fun while it lasts, with plenty to mull over afterwards.