Co-sponsored by Davidson College’s music department and their radio station, Classical Public Radio 89.9 WDAV, the 2016 Young Chamber Musicians Competition was judged in two separate divisions: juniors aged 14-18 and seniors 19-25. Now in its third year, the competition has grown in audience interest, in the number of youth ensembles vying for the prizes, and in the prize money they’re playing for: $2500/1500 in the junior division for the top two groups, and $4000/2000 for the seniors. The event was not only moved from Tyler-Tallman Hall to the Duke Performance Hall but it was also broadcast live on WDAV for the first time.

Finalists were selected from video submissions, assured not only of second place prize money in each division, but also flown into Davidson with complimentary hotel accommodations. In the junior division, the Noctis Quartet from New York City faced off against a Los Angeles outfit, the Chimera Quartet, hailing from the Coburn School. Their elders came from university programs that the juniors might be aspiring to: the Von Quartet from Jacobs School of Music at the University of Indiana and the Onyx Quartet from the Cleveland Institute of Music, which is affiliated with Case Western Reserve University.

The judging panel included Charlotte Symphony’s principal cellist, Alan Black; Wake Forest University’s composer-in-residence, Dan Locklair; and the Western Piedmont Symphony’s music director, John Gordon Ross. I doubt that the judging panel’s august expertise was truly necessary in determining the winners in each of the two divisions, but the question of which ensemble was the best overall turned out to be unexpectedly challenging, calling upon some true discernment. It was fortunate that a new prize had been added to the competition – a $2000 People’s Choice Award.

Votes were cast via cellphone texts by members of the live audience and by WDAV’s listeners. Each of the four finalists had a distinctive code listeners could text to a phone number that was shown online and in the hall – one vote per cell phone. The line did not open until all the competitors had performed, and listeners had three minutes to submit their choices while they listened to a recorded performance by a past winner. While it was possible to game this voting system, it was nothing like the vote-early-and-vote-often travesties promoted by American Idol or Major League Baseball’s All-Star Game.

Each of the auditions submitted to the competition had to be comprised of complete movements from two separate chamber works selected from two different periods of classical music history – Early or Baroque (pre-1770), Classical (1770-1810), Romantic (1811-1900), Modern (1900-50), or Contemporary (1950-present).

Opening the finals, Noctis was unique among the quartets in performing their two movements in reverse chronological order, beginning with the famed “Death and the Maiden” second movement of Schubert’s String Quartet No. 14 (1826) and continuing with the final movement of Beethoven’s String Quartet No. 9, the last of the three Op. 59 “Rasumovsky” quartets (1806). Although the “Death and the Maiden” tempo seemed a notch too slow at first, I was very impressed by the sound in the hall, where I’d never heard a classical concert before. I’d seen numerous stage musicals in the hall, by the Theatre Department and the town’s Community Players, with musicians placed either upstage or in the orchestra pit, so it was a bit revelatory to hear how warm, clear, and full-bodied a string quartet sounded from center stage not too far forward from the proscenium.

Helping the hall to shine, first violinist Kevin Zhu coaxed very sweet sounds from his instrument from the start, playing with praiseworthy élan particularly in the low and midrange. If the sluggish tempo at the outset seemed somewhat misjudged, the sudden acceleration and increase in volume were that much more startling when they came, and if Zhu seemed less assured in his first ascents into the treble, he clearly improved when the music sped into triplets, though there was lingering thinness even in his most assured playing. Behind Zhu, cellist Chase Park, second violinist Andrew Kim, and violist Jacob van der Sloot were unexceptional in the Schubert, but van der Sloot leapt into Beethoven’s Allegro Molto fearlessly at an uncompromised tempo, followed by Kim and Park on the same fugal path – all three of them more characterful than before. The effect was thrilling even before Zhu layered onto the fugue, absolutely on fire from his first notes. No doubt about it, the strategy of flipping the chronology of their pieces allowed the Noctis Quartet to leave with a very positive impression. 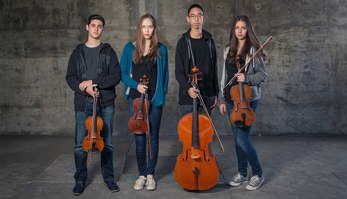 The other junior finalists, the Chimera Quartet, had nearly as much of a prodigy factor going for them as their rivals. Their first violinist Geneva Lewis, like Zhu, had logged two appearances on Christopher O’Riley’s From the Top, the NPR program showcasing young classical musicians – but Lewis hadn’t been showcased there until the ripe old age of 16 while Zhu had scored his first nationwide airtime when he was 12. From the start of Haydn’s String Quartet Op. 77/2 in F, Lewis was the more completely polished performer, and she enjoyed more impressive backing from cellist Tomsen Su amid the shifting tempos and dynamics of the opening Allegro Moderato. The ensemble’s program was also better calculated to show its range, shifting from Haydn’s F Major to the spirited Allegro vivace from Bartók’s String Quartet No. 1 in A minor. Su once again excelled and, though violist Emma Wernig was unexceptional in the brief moment when she took the lead, Cameron Alan-Lee showed some solid potential when he took the spotlight. Yet it was Lewis who raised her level most impressively in Bartók’s second movement, immersing herself in the tempo and mood changes, wowing the audience and inspiring her collaborators. 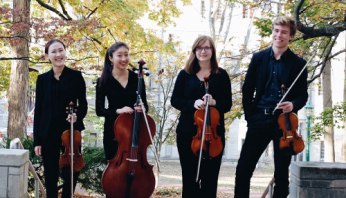 After the Chimera Quartet lifted my expectations for the senior division, the Von Quartet let me down, beginning their pairing with the opening Allegro assai appassionato from Mendelssohn’s E minor String Quartet No. 4. In the wake of Lewis’s polished work – and Zhu’s rich tone – Von’s first violin, Jisun Lee, sounded surprisingly pinched and tinny, not as impressive as she sounds on the ensemble’s YouTube video. Lee steadied noticeably when the movement calmed for a second time, just past the midpoint, but Joanne Yesol Choi’s sound remained richer and surer as she played the cello. While the Icelandic second violinist, Gudbjartur Hakonarson, evidently had input into the Von’s Icelandic name, he didn’t have enough say in the music-making for me to pass a meaningful judgment. On the other hand, Ursula Steele demonstrated the fire that Ginastera calls for when the ensemble came to the Furioso fifth movement of his String Quartet No. 2, and Choi continued to assert herself effectively. The churning astringency of the movement was also friendlier to the washboard aspect of Lee’s thin tone.

The Onyx Quartet had little difficulty eclipsing their senior rivals, but they committed a strategic misstep in competing for the People’s Choice Award. Starting out with Beethoven’s String Quartet No. 11 in F minor, they didn’t put their best foot forward in parrying the exploits of first violinists Zhu and Lewis. Taking the first violin chair for the Allegro con brio opening movement, Michael Siess was underpowered and unexceptional. However, cellist Noah Krauss was a steady force in accompaniment, and Genevive Smelser was unquestionably the best second violinist I had heard all afternoon – so much so that I wondered whether better results might have been achieved if she and Siess had switched places. Sure enough, when Onyx moved along to Debussy’s G minor String Quartet, Smelser took over the first violin chair for the opening Animé et très decidé movement. Although the music didn’t match the excitement of the Noctis “Rasumovsky” or the Chimera assault on the Bartók, the performance was easily their equal. Not only was the first violin richer and more forceful, the ensemble harmonies were exquisite as Krauss warmed to Smelser’s leadership, adding more gusto.

While the judges’ decisions, awarding the top prizes to Chimera and Onyx, were predictable enough, I wondered whether they would have had the temerity to pick the junior winners as the best overall. Audience members and broadcast listeners who voted on their cell phones had sufficient discernment to choose Chimera as the People’s Choice winners – an upset victory as surprising to the audience as it was to members of the quartet. There was one more delicious surprise for the audience that wasn’t detailed in our program booklets: the senior winners earned the opportunity to perform an encore. As Smelser resumed the first violin chair, we got another taste of their Debussy from Onyx, this time the Andantino third movement. Not only did Siess surpass himself here on second violin while Krauss contributed some really fine work on the cello, violist Spencer Ingersoll emerged from obscurity with some noteworthy input. All four members of this quartet can return to Cleveland with their heads held high.