Review: Exit, Pursued by a Bear 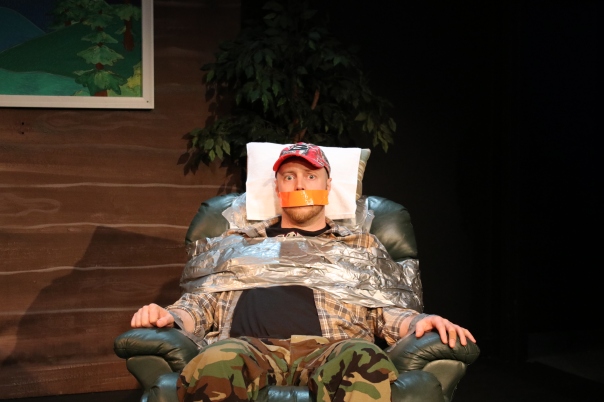 It’s been 28 years since I saw a murderous woman binding a man to a chair onstage, and I haven’t forgotten the spectacle of that near rape-victim turning the tables – and a spool of duct tape – on her would-be rapist. Maybe there were other instances after that stunning UNC Charlotte production of Extremities in 1991, one of the top five dramas I critiqued that year. If so, those action she-roes haven’t seared themselves in my memory the way that William Mastrosimone’s did.

A trail of empty honey bottles greeted us outside the Warehouse Performing Arts Center storefront in Cornelius as we entered upon a similar scene in Exit, Pursued by a Bear, the new Charlotte’s Off-Broadway production directed by Anne Lambert. Once again, three people are deliberating what to do with the captive – Kyle Carter, who has abused his wife Nan for the umpteenth time. Lauren Gunderson’s 2012 play, subtitled “A Southern-Fried Revenge Comedy,” isn’t quite as intent on ratcheting up the tension.

Like Gunderson’s title, derived from Shakespeare, it’s complicated. Often cited as the Bard’s most outré – or hilarious – or expensive – stage direction, “Exit, pursued by a bear” occurs in Act 3, Scene 3, of The Winter’s Tale. The fleeing nobleman is the otherwise forgettable Antigonus, whose mauling is vividly reported a moment later by the curiously named Clown, a shepherd’s son, while the bear is still devouring its kill offstage. 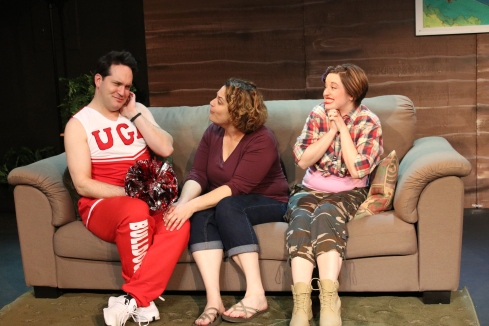 Nan isn’t intending to give her husband even that sporting chance at survival. She plans to abandon her secluded cabin in the Georgia woods and leave the doors open for any bear in the vicinity to enter. To hurry the process, Nan and her friends Simon and Sweetheart are adding inducements to make Kyle more aromatic and inviting. Some honey, of course, but here’s some luck: Kyle just killed a deer, so they can cut up some fresh meat and strew that around, too. Cool condiments!

Since Conrad Harvey as Kyle is already bound and gagged as we walk by with our tickets and drinks – hey, go ahead and take selfies with Conrad if you like – Gunderson is taking on two conflicting objectives when the lights come up. She’s painstakingly justifying what Nan is doing to her husband, and she’s striving to preserve the murderous unraveling of the Carters’ marriage in a comedy mold. Nan’s accomplices come in handy for both of these objectives.

Sweetheart is a stripper at a local bar who aspires to be an actress – or at least a movie star – and Kyle is Nan’s lifelong best friend. Since he is a bit of a queen in his Georgia Bulldogs cheerleading outfit, the stripper-transvestite combo is inherently comical as soon as it forms, if you’re not going to be offended by stereotyped affronts to political correctness and feminism. Part of the action, you must remember, is Nan overcoming her submissiveness and moving towards feminism. It’s a liberating leap. 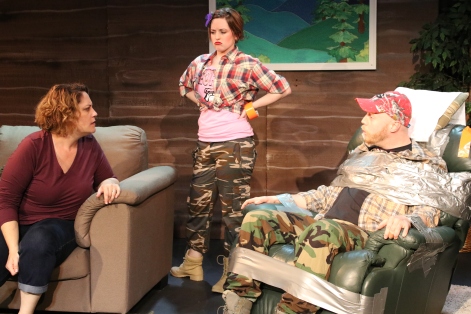 With Kyle as her literally captive audience, Nan will express the anger, frustration, and humiliation she has kept bottled up inside by playing out the key scenes that have pushed her to this drastic homicidal response. Since Kyle is indisposed – and hasn’t learned his lines – Julia Benfield as Sweetheart will step into the role of Nan’s husband in these flashbacks. Lambert has made a cagey casting choice here. Benfield is not only dwarfed by Harvey, you’ll see that Julie Janorschke Gawle towers over her as well. More built-in comedy.

Benfield is trashy in her cinched flannel shirt impersonating Kyle, and a fair amount of that trashiness appears to come naturally, but the more we get to know her, the more clearly we see that she isn’t a slut or a bimbo. With all the two-handed scenes in the flashbacks, you might worry that Simon is simply superfluous. But he’s more than a cheerleader. When Nan wavers, Simon is there to help shore up her resolve.

Not always the subtlest of performers, Ryan Stamey calibrates and balances his bloodthirsty zeal, his genuine affection for Nan, and his flaming outrageousness in such a precise way that he emerges as genuinely human rather than as a cartoon provocateur. With this kind of quirky support, Gawle can explore the serious depths that Gunderson explores in the Carters’ abusive marriage. Nan’s waverings are based in a pathological dependency that develops between an abused spouse and her abuser, ground into the rubble of crushed self-esteem. 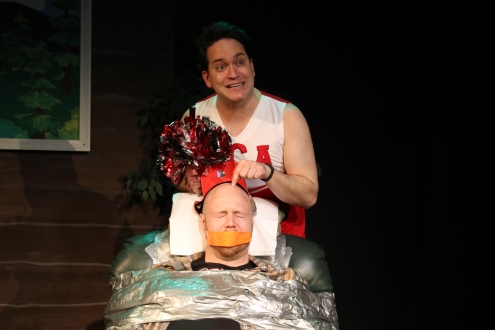 Gunderson also wants us to be ambivalent about the payback Nan is meting out, no matter how many Hollywood revenge flicks we’ve seen. As if he were on trial rather than passively listening to his sentence, Kyle gets his chances to speak and defend himself. More than that, he gets Nan to allow him a temporary reprieve from his bondage, so that he can re-enact the good times they had together before things went sour.

Harvey doesn’t mitigate the fact that Kyle is a boorish hayseed, but he also doesn’t hold back on the sincerity of “getting it” and his intent to be a better man. We’re apt to be a little torn, as Nan is, on the option of giving Kyle a second chance. Gawle is visibly affected by Harvey’s pleas, his evocations of past Kyles, and perhaps his newfound respect for the doormat who has risen up against him. So with the prospect of Kyle suddenly reverting to violence, there’s not only dramatic tension in the air but also multiple layers of give-and-take between Nan and Kyle, Nan and Simon, between the men and inside Nan’s heart.

Feminists will appreciate how this deadlock is broken. 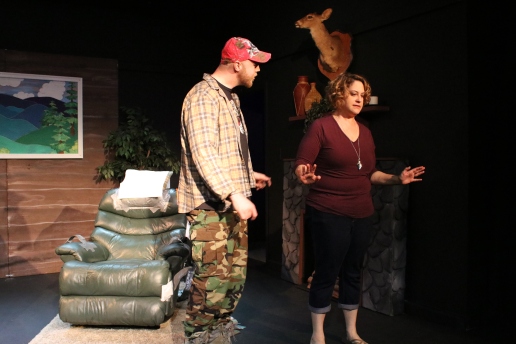 Gawle does everything right interacting with the other performers. She even gives herself moments when she ponders the enormity of what she’s planning – and to question whether she’s sufficiently calm to proceed after the suddenness and the adrenaline rush of what she has done and how it has changed her. One thing you might question is whether Gawle is as Southern or as trashy as Gunderson imagined her. Hang in there until Nan’s final scene, and you’ll likely see the rationale for the choice Gawle and Lambert have made in crafting her character.

Along with the cast’s work onstage, costume design by Ramsey Lyric, lighting by Sean Kimbro, and Jarvis Garvin’s fight choreography are all indicative of Charlotte Broadway’s professionalism. The only dodgy aspect of this production are the projections flashed on the upstage wall delivering stage directions when we reach Gunderson’s play-within-a-play segments. The lettering doesn’t exactly pop, and efforts to read them can draw attention away from the action. Maybe freezing the action might help solve the problem. Worth a try.

Otherwise, Exit, Pursued by a Bear is all-pro all the way. Consider yourself lucky if you can pursue and snag a ticket.