Even before you set out for the Charlotte Art League, the quest for parking, and the unique Eat the Runt from Donna Scott Productions, you need to remember one key preparation: bring your smartphone. Yes, you’ll be asked to turn off or silence the device when the action is set to begin, but before that, you’ll be asked to join the remainder of the audience in choosing the cast for that evening’s performance.

Eight actors vie for the seven roles listed in your program. The audience goes through the cast list one by one, voting their choice for each role on a group texting setup by punching the number assigned to each actor. Playwright Avery Crozier gives each of the characters at his (or her) second-tier art museum a unisex name, so any member of the ensemble directed by Tonya Bludsworth might play any of the roles on a given night.

To execute all of the possible 40,320 casting permutations, each actor must be prepared to play all of the roles, wear all of the costumes, and pounce on cues from all his or her castmates. That not only multiplies what each character has to memorize and the number of costumes designer Luci Wilson has to create, it also multiplies the amount of time that the ensemble must devote to rehearsal – even though they can’t begin to cover all the possible scene partners they will have during the actual run of Runt performances.

On the Saturday night that I attended, I voted with the audience on four of our choices: Ericka Ross as grantwriter Chris, Stephen Seay as human resources coordinator Jean, Tracie Frank as curator of modern art Hollis, and Kevin Shimko as museum director Pinky. Andrea King won the juiciest – and most demanding – role as Merritt, interviewing for a vacant position at the museum. Kevin Aoussou as director of development Royce and Jenn Grabenstetter as museum trustee Sidney rounded out the cast. 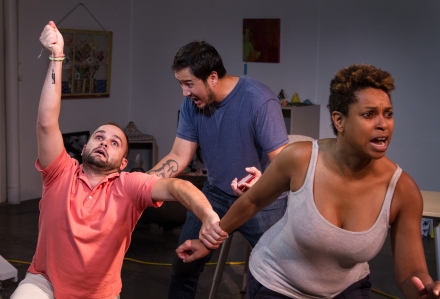 Somehow Stephen West-Rogers’ previous exploits in theatrical versions of Fight Club and Trainspotting had escaped the notice of Donna Scott fans. Nor did his new clean-shaven look bring fresh evocations of his ruggedness. As a result, West-Rogers was the odd man out, sent away to take the night off when Shimko snagged the last remaining role.

After this poignant moment, presided over by Scott, we were asked to give the cast a few minutes to sort things out, a reasonable enough request, I thought. When they returned, it was virtually impossible to find any indication that this wasn’t the fixed cast that had rehearsed Eat the Runt every night. King especially was a delight as Merritt, deftly bringing out the applicant’s uncanny ability to take the ideal approach for each museum official who interviewed her.

A few days later, some of the deception that had been played on me became clearer. By then, I couldn’t regret the fun ride that Eat the Runt had taken me on. It may be radically different for you if your casting choices turn out to be more incongruous, risqué, or preposterous. That may increase the already plentiful comedy.