Now concluding its 38th season, the North Carolina Bach Festival has a big name and a rich history. But when its new artistic director, Dr. Roman Placzek, asked his Charlotte audience at the Steinway Piano Gallery whether anyone had ever heard of the festival before, he confidently expected no hands to be raised. That’s because the festival, previously staged exclusively in Raleigh, hasn’t run long or traveled far until this year’s edition. Consisting of one featured artist concert and a small youth concert, the NC Bach was barely larger than the BachFest at St. Alban’s Church in Davidson or Charlotte Symphony’s Bachtoberfest, neither of which sport statewide pretensions. 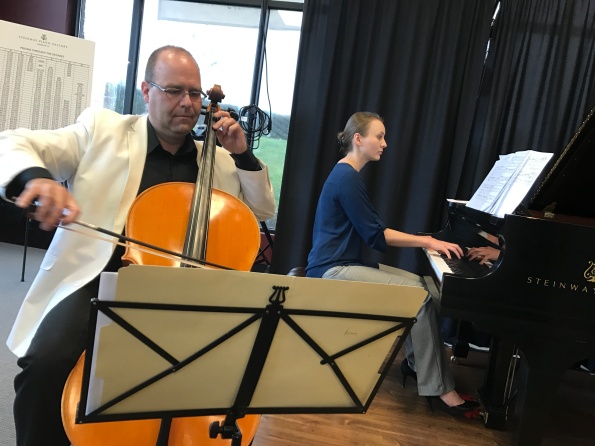 Placzek fixed that in 2017, for there had been two guest artist concerts in Raleigh after the February 26 youth concert, with each of these subsequent concerts spotlighting another award-winning young instrumentalist chosen by the Festival. Featured artists were Placzek and guitarist José Manuel Lezcano on March 4 after pianist William Wolfram had been featured the previous evening. Placzek and his cello, along with NC Bach Festival youth program director Elena Nezhdanova, proceeded with the most notable trailblazing, spreading the good news of the Bach Festival to the Steinway Gallery in Greensboro on March 5 and to the Steinway Gallery in Charlotte the following Saturday. Above the duo’s names in the program booklet, pianist John Salmon appeared. That began to make very good sense when Dr. Salmon took over most of the hosting chores.

The ensemble offered the same all-Bach program at both Steinway Galleries – but most of the offerings were boldly rearranged by Salmon. You don’t expect jazz to predominate at a Bach festival, and perhaps not at a Steinway gallery. Many of the hour-long concerts in Steinway Piano Gallery Live series have, in fact, featured jazz artists, and the mingling of jazz improvisation with works by Bach dates back to the Swingle Singers’ landmark Bach’s Greatest Hits album that won two Grammy Awards in 1963. If you’re tempted to check the Swingles out on Spotify, the Jazz Classical Crossings channel will stream more of the same. As for Salmon, he’s been jazzing up Bach for a few years, too. On the faculty at the UNC Greensboro’s School of Music since 1989, Salmon has published Jazz Up the Sinfonias, Jazz Up the Inventions, as well as a more varied Add on Bach. At the Steinway concerts, Salmon targeted the Sinfonias seven times and the Inventions five.

Whetting our appetites and barely hinting at the mayhem to follow, Salmon began with the Partita in B-flat, BWV 825. Contrapuntal lines in the opening Praeludium came through with admirable clarity, and Salmon had no problem at all dramatically quickening the pace of the Allemande and keeping tempo brisk in the Courante. We began to see what Salmon would be about in the elegant Sarabande where the pianist subtly modulated that halting tempo. But it was in the two Menuets and the concluding Gigue that Salmon’s playing became noticeably freer.

Tempo modulated more openly in the first Minuet and there was an interesting mix of freedom and rigidity in the second, but as he accelerated gleefully into the Gigue, there was an even more daring concept. In addition to the tempo modulations, Salmon overlaid a long decrescendo followed by an equally long crescendo, adding new drama. Next he played the Invention No. 1 in relatively traditional fashion, adding ornamentation that would probably not have scandalized 18th Century listeners. Only at the end did Salmon add an extra coda, finishing with a faintly bluesy chord – one that became bluesier after he confessed his crime to the audience and gave a brief demonstration.

Prelude No. 1 from The Well-Tempered Clavier, Book 1, wasn’t appreciably jazzier, but here Salmon added a bass-line for the cello that was a nice introduction to the warm tones that Placzek can coax from his instrument. Next came a before-and-after pairing of two arrangements that Salmon has done for Invention No. 8, both of them calling for two pianos. With the first No. 8, done for the second piano in a Baroque continuo style, Nezhdanova appeared totally relaxed and unchallenged, but the second arrangement was a radical change that noticeably increased her alertness and involvement.

Subtitled “Great Bach’s Afire,” Salmon swept from Baroque and past jazz, landing firmly in the rock-and-roll style of Jerry Lee Lewis, though I didn’t actually catch the melodic link between Jerry Lee’s “Great Balls of Fire” and this Bach standby. But goodness gracious, the Lewis fire was definitely in evidence, so much so that, as Salmon was clanking the keyboard at the end, I signaled to him that he needed to sweep the keys with his elbow. That’s what Lewis, nicknamed “The Killer” in his rowdiest heydays, would do at the keyboard before his signature finish, lifting a leg and pounding the last treble notes with his heel.

Invention No. 6, scored for all three players in the style of a Baroque trio, was more than a little anticlimactic after these fireworks, for Nezhdanova didn’t even need to raise her left hand to play her part. So the last Invention on the program, the same No. 6 turned into “There’s A Banjo in the House,” turned out to be the jazziest so far, with Salmon tossing off some pleasurable improvisation and the ensemble sounding more like a jazz trio than a bluegrass ensemble. Moving forward into Salmon’s Sinfonia arrangements, the music stayed jazzier with no more relatively ancient and tame variants preceding the arranger’s quirkily titled ones.

The Steinway Gallery was best acoustically when one of the pianists played and/or Placzek gushed forth his mellow sounds. The two dovetailed Steinways looked so perfect together that I needed to assure my wife that they were two separate pianos (even though I wasn’t absolutely sure). But while Salmon’s keyboard was further away from my front row seat to my right, his soundboard was closer. That made a difference when he and Nezhdanova played together.

With his jazz and rock proclivities, Salmon was already the more gregarious player, but the placement of the two pianos double-underlined the difference. Nezhdanova was fairly buried in the C-Major Sinfonia No. 1, renamed “A Rush of Happiness Is Here and Makes Me Want to Spread the Joy.” She had better chances to show her mettle in the introductory portions of the “Ray Brown, Come Lay It Down” reincarnation of Sinfonia No. 2 in C Minor, and in the “You Are So Nice” remake of Sinfonia No. 3 in D, where Salmon divided the melody line into call-and-response form.

The Nezhdanova-Placzek duo shone brightest in the final piece, Salmon’s charming transformation of Sinfonia 10 in G into “Scamper ‘Round and Make Some Sound.” Here the pianist and cellist were allowed to languish in their accustomed classical mode while playing the long introductory episode. In a sense, by giving his accompanists this space before he roared in with his improvisatory licks, Salmon was observing a longtime tradition in the jazz world. As often as not, the leader of a combo at a club date will allow every member of the band to solo during the final tune.

Yet the jazziest collaboration of this trio happened in the penultimate arrangement of Sinfonia No. 8 in F, newly minted as “Double Time Times Two.” Both the title and the arranger warned us that this would be fast, and it was. Even after the second concert with Salmon, NC Bach artistic director Placzek seemed to be marveling as much as we were, cooling down behind his cello – but for a different reason. “Every one of the notes I just played was what Bach wrote!” he told us. So he can return to Raleigh with another new idea. While Wolfram playing the complete Goldbergs and even Lezcano playing Fernando Sor’s Fantasie in D are what we should expect at a Bach Festival, it might not be amiss to look for fresh new ways our state’s annual Bach celebration could be more celebratory. More festive! With Salmon and Nezhdanova at his Steinway concerts, Placzek certainly hit the right notes.