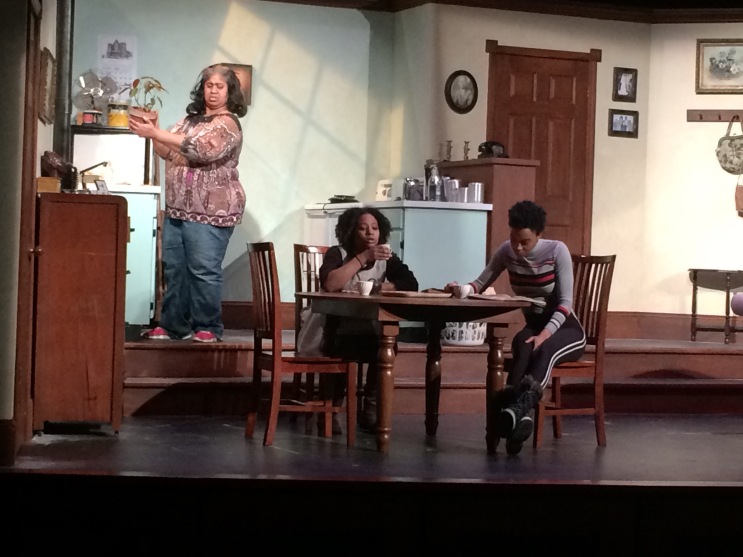 Review: Raisin in the Sun

At a distance of 58 years, people who read Lorraine Hansberry’s A Raisin in the Sun and its familiar epigraph, “A Dream Deferred,” may get the idea that the playwright was exhuming a poem written by Langston Hughes back in his heyday during the Harlem Renaissance. Truth is, Hughes published this poem as part of his Montage of a Dream Deferred in 1951, a quarter of a century after his first book of poetry appeared.

When Hansberry seized upon it, “A Dream Deferred” could hardly have been anthologized more than a couple of times, let alone become an acknowledged part of America’s literary heritage. Hansberry’s script and the performances by Claudia McNeil and Sidney Poitier as Lena and Walter Lee Younger – in both the 1959 Broadway production and the 1961 Hollywood adaptation – were almost surely the bridge that carried Hughes’s poem across that gulf.

And was Raisin perhaps the key link between Langston’s “Dream” poem and a certain speech by the Rev. Martin Luther King?

The questions of how prescient or pivotal the works of Hughes and Hansberry were in anticipating or sparking the Civil Rights advances that followed are temptingly open to conjecture. What the current Theatre Charlotte production shows us to be indisputable is Hansberry’s intention to show us all of the possible answers Hughes offers to his poem’s opening question, “What happens to a dream deferred?” She clearly opts for the idea that the right answer to Hughes’s multiple choices is all of the above.

Yes, we see all that is festering and rotting within the Younger family in Walter Lee’s deteriorating relationships with his mom Lena and his wife Ruth. But thanks to Natasha T. Wall as Lena and Jermaine Gamble as Walter Lee, we see the most compelling and decisive turns that deferred dreams take. It’s Lena who is most sensitive when the dreams of her family, including her own, begin to dry up like that raisin, and it’s Walter Lee who personifies the explosions that can occur after a lifetime of being thwarted and disrespected.

In her Theatre Charlotte debut, director Kim Parati wisely scales down these two titans to less mythic, more human dimensions. With Wall, there’s also a subtle update: this matriarch isn’t crossing the stage to slap her daughter Beneatha when the spirited collegian implies that God no longer resides in the Younger household. But this Lena does take firm hold of her daughter and give her a firm shaking.

So okay, maybe Parati has discreetly tossed the sagging “like a heavy load” aspect of deferred dreams off the shoulders of the elder Youngers. The less-burdened Gamble becomes a less monumentally whiney Walter Lee than we usually see, more of a victim and less of a screw-up. I noted with surprise that this Walter Lee actually seems to have given some thought to his liquor store scheme. I find more in Gamble’s failure that makes me think that Walter Lee feels like he let his father down as much as his mother.

Of course, we never see dad, though set designer Tim Parati hangs a strategic photograph near the Younger front door that must be him. It’s the $10,000 from his life insurance that fuels the newborn hopes and storm clouds that besiege the Youngers in their undersized apartment, where Walter Lee’s son Travis conspicuously sleeps on the couch. If that merely seems cute, then there’s also the spectacle of the family racing out the front door to snare the bathroom that they share with their neighbors.

A real newborn threatens to make the living situation worse as the family waits for the big insurance check to come in the mail – Ruth is pregnant with a second child that she dreads telling Walter Lee about. There’s a dark conspiratorial tone to the way Hadassah McGill as Ruth talks about the prospect of abortion, reminding us of the prehistoric life-of-the-mother era before Roe v. Wade.

Now I can’t defend Hansberry from the charge that she neglects the “stink like rotten meat” line in Hughes’s poem. Yet Parati seems very keen on giving new emphasis to the most cryptic outcome of deferred dreams – if “crust and sugar over Like a syrupy sweet” is the bluesy, jazzy sublimation I think it is. When Beneatha puts her newfound African music on the phonograph and starts dancing in the African garb that her Nigerian beau Asagai has given her, the temperature is already pretty warm because costume designer Tiffany Eck has done her work in sparkling fashion.

El Bey is a stunning actress for her age (a senior at Northwest School of the Arts), but she gets plenty to play off of. Not only is there rawness and seething fury from Gamble – as a sibling, a son, and a husband – there is also charming equipoise and bemused detachment from Gerard Hazelton as Asagai, most pointedly when he chides Beneatha for her assimilationist dress and her straightened hair.

There’s a visible age difference between Hazelton and El Bey, so her eagerness to make herself over to his liking still plays credibly. But the takeaway between this Beneatha and Walter Lee doesn’t sustain itself so easily. When El Bey is backing down against Mama about God still residing in their home, there’s too much vivacity in her to think she’s crushed. And when Walter Lee so memorably comes into his manhood in the final scene, his assumption that Beneatha must get his permission before following Asagai back to Nigeria no longer seems to have the weight it had when Poitier laid down the law in 1961.

Among the many satisfactions of this Theatre Charlotte Raisin is its clear vision. Parati and her cast know what still holds strong, what parts can stand stronger emphasis, and where to mute some attitudes that would soon lapse after Hansberry’s time. There’s even a character we’ve never seen before, neighbor lady Mrs. Johnson (an intrusive, snoopy, and hint-dropping Eryn Victoria), who drops by and quickly overstays her welcome.

The scene, discarded from the show before it originally opened on Broadway, doesn’t add to the power of Hansberry’s script. But it ensures that this Raisin is like none you’ve ever seen before