In its original form as a 1949 motion picture – adapted from a novel by Roy Horniman – Kind Hearts and Coronets hinted obliquely at its dualities. But when Robert L. Freedman took over the story for his musical collaboration with composer Steven Lutvak, nary a mention of the famed Alec Guinness comedy vehicle was on the title page on opening night in 2013. Instead, audience and critics encountered A Gentleman’s Guide to Love & Murder, a sharper description of the attractions to be found in Monty Navarro’s lurid confessions.

We seem to be hearing Navarro’s confessions on the eve of his march to the gallows. Short-circuiting any fears that we are about to see a grim tale of ruthless bloodlust and implacable retribution, the stage is ornately set up to replicate the style and era of vaudeville. On Broadway, everything in Monty’s narrative was reenacted on a proscenium stage within the proscenium of the Walter Kerr Theatre’s stage. Critics were charmed by the frank artificiality of this transformative concept, showering Gentleman’s Guide with both the Tony and Drama Desk awards for best musical. Audiences? Not so much: the show shuttered after a respectable 26-month run, hardly a smash.

It seemed to be a different story on opening night in Charlotte, where the touring version of Gentleman’s Guide is playing at Knight Theater, a cozier destination than Belk Theater, where most national tours are staged. A full house at the Knight, boxy though it might be, just feels more like a Broadway experience, and the audience’s reaction to the welcome novelty was noticeably electric. At the Knight, the cerebral nature of this story wasn’t at all off-putting.

Cut off by his grandpa from the status and riches of the D’Ysquith family, Monty only learns of his noble lineage after his mother’s funeral, thanks to the helpful gossip of Miss Shingle, a maidservant he has never met before. Papers discovered in mom’s humble flat confirm Shingle’s assertions, so Monty tries to reestablish his family ties. After all, despite being the son of a washwoman, he’s ninth in line to become the Earl of Highhurst.

The luscious Sibella Hallward is more than adequate incentive for Monty to murder the eight who are before him line, for she is disinclined to wed a pauper – and her looks open wide vistas of alternatives. So it is here that the dualities of this nifty plot conjoin. To rise in Sibella’s estimation, Monty is hormonally driven to murder his way to the top of the bunch.

It won’t be a vulgar or brutish journey, for Monty’s murders are cunningly devised to evade detection. But along the way – say midway in his murderous exploits – Monty meets a D’Ysquith, namely young Phoebe, who appeals to his heart and mind as much as Sibella enchants his eyes and loins.

While Monty’s labors are mercifully condensed in number from Hercules’ mythical 12, the serial murders can become somewhat tedious and banal when performed within two prosceniums. What keeps us interested through two acts and a 2:09 playing time are the emerging love triangle, steadily intensifying toward a farcical climax, and the ripeness of most of the D’Ysquith victims for their colorful exterminations.

Nor does it hurt that all of the doomed D’Ysquiths are portrayed by the same actor, John Rapson, a Herculean feat that more than matches Monty’s. As the body count rises, so does the frequency of crossdressing, and the women nicely illustrate the range of worthiness that the D’Ysquiths actually have for extinction. Lady Salomé D’Ysquith Pumphrey, a totally wretched stage actress, is probably the easiest to dispatch with a clear conscience. But the mammoth Lady Hyacinth D’Ysquith undertakes beneficent projects all across the globe. She is also the toughest to extinguish, for Monty sends her off to various needy destinations where war, disease, or cannibals might act as his homicidal proxies. 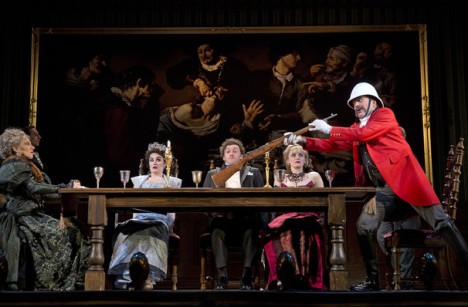 Ultimately, Monty is challenged to liquidate themost detestable of the D’Ysquiths, Lord Adalbert, the current Earl. To illustrate the prodigious odiousness of the man, he must be paired with a wife, Lady Eugenia, who is nearly as waspish and hideous as he. Lord and Lady D’Ysquith host a formal dinner, where Monty, Phoebe, and Sibella are the invited guests. Repeatedly, husband and wife snarl and hiss at each other like raging jungle cats before suddenly regaining their highborn composure.

Rapson takes on all his D’Ysquiths with satisfying gusto. His Lord Asquith D’Ysquith, the one truly benign member of the clan, is positively Dickensian. But at the dinner table, I did wish that the full house of Charlotte theatergoers could have been rewarded with the awesome flair – and phlegm – that Jefferson Mays brought to Lord Adalbert on Broadway. Kristen Mengelkock as Lady Eugenia was certainly sufficiently provoking.

As fine as I thought Bryce Pinkham was on Broadway as Monty, I found a smidge more sparkle from Kevin Massey when he mingled with his women. Both ladies were up to the high Broadway standard in vying for his affections. Every movement by Kristen Beth Williams as Sibella was worthy of a Vogue magazine spread or a Victoria’s Secret brochure, and Kristen Hahn was the essence of wholesome refinement as Phoebe. Both Kristens teamed up beautifully with Massey in their farcical trio, though their door slamming was bit sloppy. You certainly won’t wonder why Linda Cho won the Tony for best costume design when these ladies are onstage.

With such a fine set of frontliners behind him, Rapson may not be a dominant as Mays, but the touring show comes off as more balanced, the Love and Murder more equally weighted. Some of the enthusiastic crowd may have been surprised because Guinness’s legendary screen performance shaped their expectations.

Only two other players need to be mentioned, a testament to the compactness of A Gentleman’s Guide. Jennifer Smith insinuates herself beautifully into the beginning and ending of our story as Miss Shingle – and with “You’re a D’Ysquith,” she probably has the catchiest tune in the show. Off my radar since he appeared in a summertime musical revue at Theatre Charlotte in 2001, Ben Roseberry returns to town as Chief Inspector Pickney. Not only does he arrest our protagonist – for the one murder he didn’t commit! – he gets the opportunity to be seduced by Williams in a climactic tête-à-tête with Sibella.

Roseberry isn’t the first Broadway pro to make Charlotte’s community theatre proud, and he won’t be the last.