Finishing Jean-Pierre Bonnefoux’s penultimate year as artistic director, Charlotte Ballet served up an evening of Spring Works that carved a graceful arc from sorrow to celebration. Musically, the program could be described as all-American, though sticklers would consider that a stretch. Resident choreographer Sasha Janes’s We Danced Through Life, premiered at Chautauqua last summer, is set to Dvorak’s Symphony No. 9, “From the New World,” written in 1893 while the Czech composer was living in America.

No ambiguity about music that followed. George Balanchine’s Who Cares? was set to a sheaf of Gershwin tunes when it premiered in 1970, pared down to eight selections by associate artistic director Patricia McBride, who introduced three of the original 17 pieces back in the days when she was a star of the New York City Ballet. Capping the evening was the world premiere of Dwight Rhoden’s Bop Doo Wah, danced to eight jazz standards by the likes of Duke Ellington, Billy Strayhorn, Louis Prima, Irving Berlin, and George Benson.

Although Janes scrapped the opening movement of “New World” in condensing it to 20 minutes, he retained a fast-slow-fast (or dense-light-dense) structure by tucking the lovely Largo second movement – and its memorable “Goin’ Home” tune – in between the third movement Molto vivace and the concluding Allegro. That showcased the fearless elegance of Sarah Hayes Harkins in an achingly tender pas de deux with David Morse, along with a move I’d never seen before. 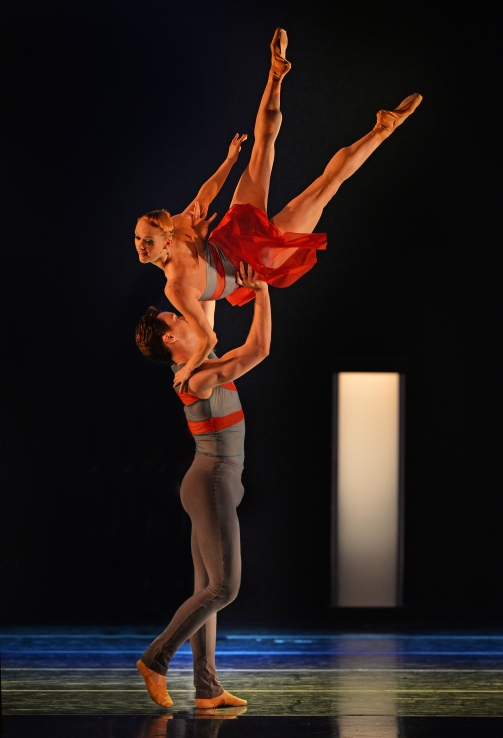 Starting from upstage right and running diagonally toward downstage center, Harkins took one of those leaps that flings a ballerina’s arms and legs out parallel to the floor an instant before a sure-handed guy catches her in midair. But there was no guy standing there to catch Harkins in Janes’s choreography. Instead, two guys somehow overtook her and caught her two arms at the same moment, one under each arm.

Clearly, Harkins and Morse were the tragic couple Janes had in mind as his most pointed evocation of Terrie Valle Hauck, who commissioned the dance at Chautauqua for her late husband Jimmy – particularly at that instant when Morse wasn’t there to catch his partner. But another couple shone in the outer movements, Alessandra Ball James and Josh Hall, amid busier action with four other couples. At the end of one set of lifts, the men didn’t put their partners down on the ground. Instead they maintained their lifts and trotted upstage, placing each woman on her own pedestal.

Aside from McBride, James and her pink flapper dress was the living link between this presentation of Who Cares? and the company’s previous revival in 2008. She’s still musical and precise in “The Man I Love,” her duet with Hall, and she’s still youthfully jazzy in “Fascinatin’ Rhythm,” the other piece that McBride originated. There was a tinge of poetry in the title tune, Jamie Dee Clifton’s duet with Hall, and a touch of Fred-and-Ginger sophistication in “Embraceable You,” the Hall-Harkins pairing.

I just felt that this Balanchine was unnecessarily musty compared to the newer pieces bookending it. Couldn’t we get a recording of Hershey Kay’s orchestrations that sounded like they were recorded in stereo, let alone digitally? And the costumes, recreated by Aimee J. Coleman, could stand a refresh. Clifton’s looked like it should have been discarded five washings ago, and Harkins’ – when cutie pie Anna Gerberich danced “My One and Only” eight years ago, it was teal, but now it seemed faded to turquoise.

Yep, it’s challenging to nitpick a Charlotte Ballet program. Everyone is so damn good, but in Rhoden’s Bop Doo Wah, we could lament seeing Addul Manzano, David Morse and Gregory Taylor for the last time. While I wasn’t particularly impressed with his singer, Gloria Reuben (more different in her interpretations than delightful), guitarist Marty Ashby’s jazz band could definitely swing and bop. But come on, man: “Teenie’s Blues,” ostensibly written by trombonist Jay Ashby, had more of Dizzy Gillespie’s “Oop Bop Sh’Bam” than anything else. 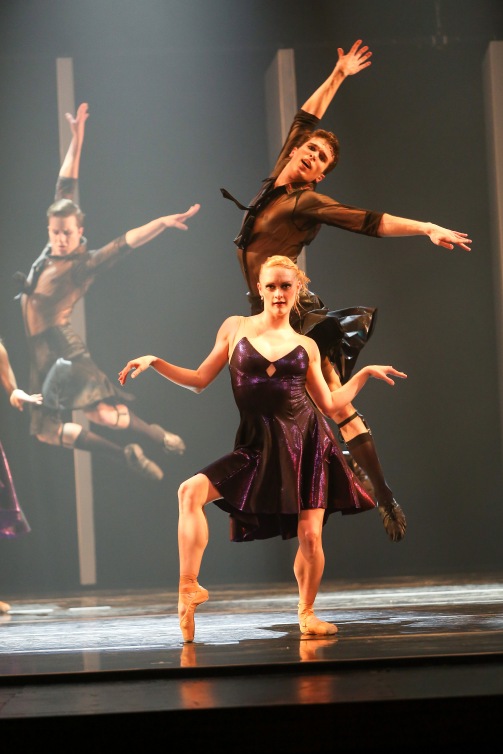 That’s why the tune stood up to those that surrounded it, Ellington’s “It Don’t Mean a Thing (If It Ain’t Got That Swing)” and Berlin’s “Steppin’ Out With My Baby.” The piece intensified with Strayhorn’s “Blood Count” as James partnered with Morse and Harkins reconnected with Hall, and “How High the Moon,” one of five pieces set by Rhoden for the full cast of 16, fired up with an alto sax solo that I considered the best of the whole suite.

Instrumental solo followed instrumental solo in this epic performance, with the guys, previously clad in punkish black costumes by Christine Darch, adding on matching androgynous skirts as they intensified the furious celebration. Not the way Manzano envisioned ending his career, I’m sure – his was the only farewell performance signaling retirement – but he looked as hot as ever in his valedictory appearance. Darch’s costumes for the women were equally sensuous, but due to the shifting hues of Michael Korsch’s lighting design, I never could determine exactly what three or four deep colors the ladies wore.