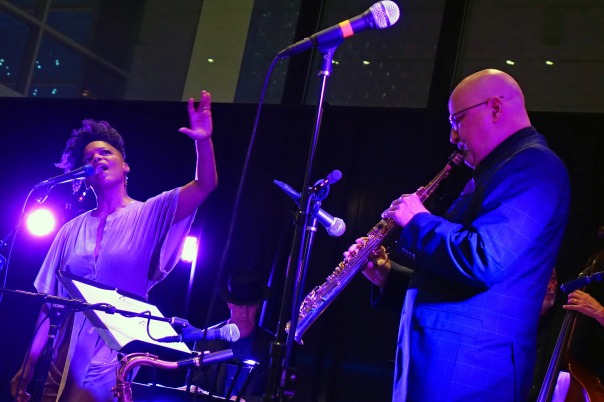 March 4, 2022, Charlotte, NC – We hadn’t seen or heard Nnenna Freelon singing in Charlotte for over four years before she returned for two shows with the Ziad Jazz Quartet last week, her latest Jazz at the Bechtler concert. The interval would have been just over two years if Freelon had appeared as scheduled at the Bechtler series’ all-star 10th anniversary celebration on January 3, 2020. While it’s tempting to assume that Freelon’s cancellation was part of her grieving process in the wake of her husband’s death of ALS the previous July, the six-time Grammy Award nominee had already gone into the recording studio in October 2019. The album that emerged from that stage of her grief processing, Time Traveler, was eventually released last May, so it could have come to us two years ago as the core of her canceled gig at the Bechtler, a nice little scoop for us.

Not to worry, after a bopping “Just Friends” warmup from his quartet, Ziad Rabie was now able to introduce Freelon as a seven-time Grammy nominee, with the outcome of her latest nomination for Time Traveler to be announced in Vegas on April 3. And there was also a scoop: Freelon will soon be inducted into the North Carolina Music Hall of Fame, alongside such greats as Nina Simone, James Taylor, John Coltrane, Thelonious Monk, Kate Smith, Loonis McGlohon, and Roberta Flack. The theme of Time Traveler was certainly evident in the concluding set we heard at 8:15, for it was doubly a time capsule, packaging songs we could have heard two years back at the originally-scheduled 10th anniversary gig alongside songs we did hear in November 2017.

There was nothing sneaky or accidental about the repeats, though Freelon didn’t point them out. As before, Freelon led off with her uptempo “Nature Boy,” rewriting the lyrics with a feminist twist the second time around after a searing soprano sax solo from Rabie. The ending was also the same, a “Moon River” that started off unusually mournful, hit a swinging midtempo, and eventually heated up to exultation. In a fascinating way, this questing read of “Moon River” merged Freelon’s time capsules together, for in 2017, she sang it as a tribute to two recently departed jazz greats, singer Al Jarreau and pianist Geri Allen, and she recorded it almost two years later as a tribute to her husband, famed architect Phil Freelon, who had designed Smithsonian Institute’s National Museum of African American History and Culture in Washington, the Museum of the African Diaspora in San Francisco, and the International Civil Rights Center and Museum in Greensboro. 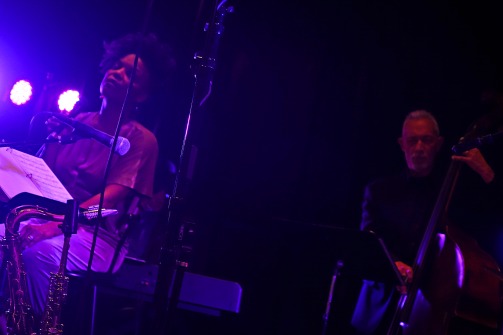 Did the audience give Freelon and bassist Ron Brendle a standing ovation for their deep, mesmerizing duet on Hoagy Carmichael’s “Skylark” because they recalled it fondly from 2017 – or because it was so achingly lovely and poignant now? Also back from 2017 was Charlie Chaplin’s “Smile,” with drummer Al Sergel navigating the transitions back and forth from Freelon’s waltzy 3/4 time to Rabie’s break-loose solo on tenor sax in a fleet 4/4 tempo. These non-lunar reprises were all from Freelon’s Homefree album of 2010, and so was her slowed-down and bluesy “I Feel Pretty,” complete with her 2017 exhortation to the men in the audience to sing out the title line, because we needed to answer for nearly all the ugliness in our world. Notwithstanding #MeToo, probably truer in 2022 than before.

Despite its aching moments striving to reach across “Moon River,” Time Traveler remembers and celebrates love far more than it bemoans loss. Aside from versions of the title composition, two tracks address the main theme, Jim Croce’s “Time in a Bottle” and Jule Styne’s “Time After Time,” the one Freelon elected to bring to the Bechtler. Freelon repeated and obsessed over the title in a concluding cadenza that was every bit as ardent as her studio version, if not more so. Solos between the vocals, pianist Noel Freidline floating gracefully over Brendle’s bass, enhanced the soulfulness. But the album isn’t simply celebratory or sentimental, for Freelon gave Harold Arlen’s “Come Rain or Come Shine” a performance that was as down-to-earth as her spoken intro, confessing that she had no idea what she had said “I do” to at the altar when she and Phil were wed. 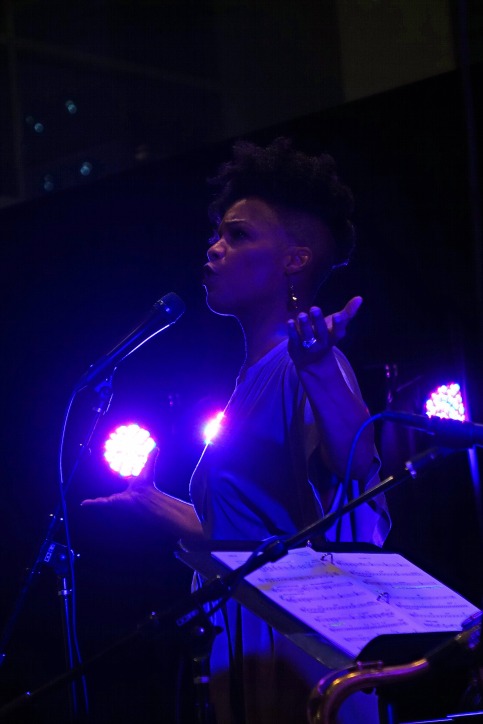 Always gorgeous, Freelon’s voice seems to be acquiring more varied textures. Up high, the Ella Fitzgerald sass is often joined with a Dinah Washington grit; and below, the Roberta Flack sensuousness occasionally gives way to a Carmen McRae worldliness and wisdom. The Freelon original, “Just You,” lost a little of its righteous gospel flavor in transitioning from the studio, where an organ and a guitar imparted a churchly tang, to the Bechtler’s lobby, where neither instrument was in attendance, though Rabie supplied superb fills on soprano sax. But a dominant motif of Freelon’s Time Traveler tribute is simply a return to songs that recapture the 1970’s, when the Phil-Nnenna romance first bloomed. Aside from “Time in a Bottle,” which serves double duty, Freelon revisits the ‘70s with Dionne Warwick’s “I Say a Little Prayer,” the Stylistics’ “You Make Me Feel Brand New,” and a Marvin Gaye medley.

Nnenna testified at the Bechtler to Phil’s adoration of “Betcha by Golly, Wow,” further evidence that he was a Stylistics fan, but he obviously wasn’t alone. Enhancing the studio version, Freelon was able to call upon the Bechtler audience to sing along with her on the refrain. Here the live instrumentation meshed almost perfectly with the studio performance as Freidline radically altered his piano timbre from acoustic to electric and Rabie more than ably substituted for Kirk Whalum in adding a smooth jazz vibe. As with “Moon River,” facets of Freelon’s concept came magnificently together. After remembering the 2017 Bechtler playlist by repeating some of it, she was giving us a raincheck on a hit she could have brought us in 2020, remembering her departed husband by singing a song they both loved. Through the mystery of music, we were singing along with Nnenna, joining her ritual of remembering Phil, while evoking memories of our own.

Originally published on 3/7 at CVNC.org