Review: What the Constitution Means to Me 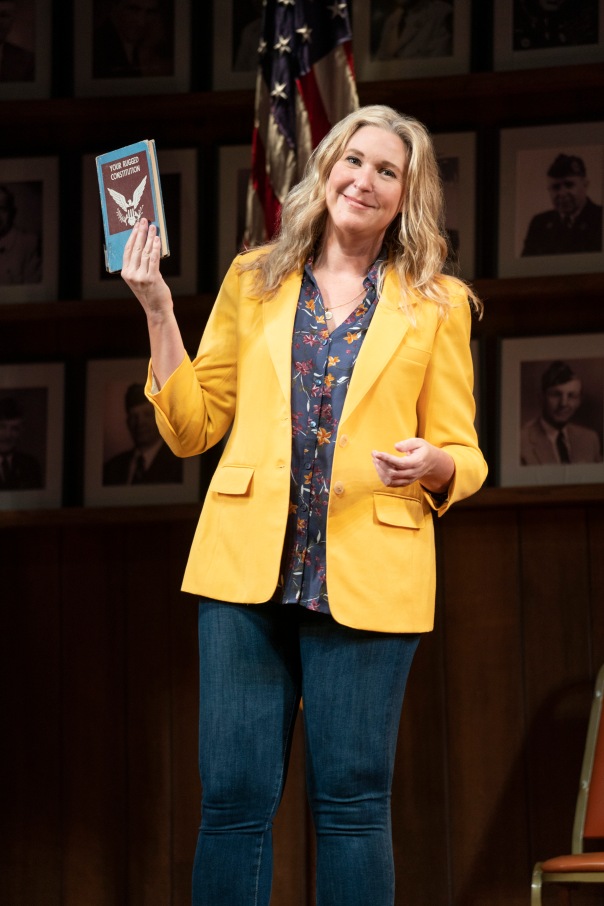 Charm and wit can help you con your way onto a debating team when you’re a teen, but when you’re competing in front of a panel of sober academic judges, you’ll find that diligent study, ready knowledge, and sharp argumentation will be far more decisive in achieving victory. I learned this lesson the hard way, anchoring a senior class team of wiseguys that was ignominiously defeated by a squad of lowly sophomore nerds in front of a full high school assembly.

Lessons learned leaning over a chessboard or declaiming from a lectern can be every bit as brutal as those learned on a baseball diamond, a hockey rink, or the gridiron. While the excitement of sports makes for better action movies or TV, shows like Chess and The 25th Annual Putnam County Spelling Bee demonstrate that cerebral competitions are better suited for live theatre. 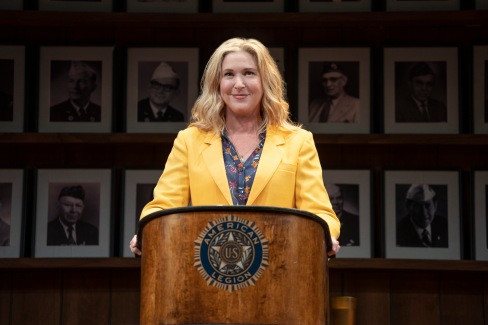 But such shows are few and far between. That’s one small reason why What the Constitution Means to Me is so fresh and welcome right now. Written by Heidi Schreck as a chronicle of her experiences as a US Constitution debater when she was a teen – with a sharp re-evaluation of her relationship with that seminal document today – What the Constitution’s finishing touches dovetailed with the rise of the #MeToo movement, its first two productions straddling the Harvey Weinstein uproar in 2017.

By the time the show opened Off-Broadway in 2018, Judge Brett Kavanaugh was dominating the headlines, adding another layer of timeliness.

We need to look back to the Democratic National Convention of 2016 as a more probable inspiration for Schreck’s reassessment. That’s when Khizr Khan, the Muslim father of a U.S. Army Captain who was killed serving in Iraq, waved a pocket edition of America’s foundational document and pointedly asked the newly anointed Republican candidate for president, “Have you even read the United States Constitution?”

Schreck’s play, now at Knight Theater, is largely a one-woman performance until its exciting and invigorating ending. It isn’t simply a reprise of 15-year-old Heidi’s breathless panegyric to the genius of our Founding Fathers, for even then, when she was earning college scholarship money at American Legion contests around the country, Schreck needed to be original and analytical in her presentations.

Older and wiser, Schreck could look back on her teenage debating years – and on our Constitution – with a more critical eye. Schreck, starring in both the Off-Broadway and Broadway productions, could play both Heidis onstage, the teen and the playwright. As the teen, she could be credulous, enthusiastic, awkward, naïve, and precocious. As the playwright, Schreck can playfully mock her younger self, or interrupt her and point out her quirks. Sharper still, she can not only take a more feminist view of the Constitution, she can flout the authority of the American Legionnaire who emcees young Heidi’s performance, strictly timekeeping her every utterance, and quizzing her on the 14th Amendment.

After all, unless the playwright gives him lines, the poor Legionnaire cannot respond to Heidi’s barbs.

The playfulness of Schreck’s concept nicely counterbalances its seriousness, for her feminist critique centers on her female ancestors – beginning with the immigration of her German great-grandmother to Washington State, purchased from a mail order catalog – and the abuse their husbands could inflict upon them with total impunity. Scenic designer Rachel Hauck’s paneled interior for the Legion Post, where Heidi will relive her debating exploits, unmistakably preps us for the assault to come.

From wall to wall, hardly a gap between them, those panels are lined with the headshots of uniformed Armed Services veterans. You could say those photos – and the one thing they have in common – personify what the Constitution means to Schreck. In this legion, four long rows of photos, there is not one woman or one person of color. Our Constitution was written by white males, many of them slaveholders, to codify the rights, privileges, and citizenship of white males – including slave ownership – with the tacit or explicit exclusion of everyone else.

The exclusivity of the US Constitution doubly impacted the immigration of Schreck’s great-grandmother in 1879, who was committed to an asylum for “melancholia” and died at age 36. You see, the “shortage” of women that partially justified her great-grandfather in shopping for a bride was the result of Native American women no longer qualifying as American.

Looping in and out of her various guises, Cassie Beck as the Heidis of the touring production applies a thin gloss to her portrayal of teen Heidi, slightly exaggerated and visibly “acting” for brief moments and slyly self-aware at others. Our encounters with teen Heidi, often punctuated by adult Heidi interjections, are presented in two parts. First, there’s the formal essay comparing the Constitution to a crucible, reconstructed from memory because her proud mother inexplicably lost the original.

In the next stage, young Heidi picks a random Amendment out of a coffee can, written on a slip of paper, and is quizzed on it. Ushers hand out copies of the Constitution at this point, enhancing our involvement and excitement. She always draws the 14th Amendment and its multiple articles, so here the interaction between Heidi and the Legionnaire, a stodgy and pallid vet in Gabriel Marin’s meticulous portrayal, becomes more intense and entertaining. For here amid the question-and-answer volleys, young Heidi is often supplanted by adult Heidi, flouting the Legionnaire’s authority and steamrolling his prissy time limits – giving this one white male a taste of being bossed and oppressed.

Afterwards, we were done with young Heidi, and both Beck and Marin got the chance to step out of character and be themselves. Marin’s transformation, taking off his Legion hat, offered more contrast, but Beck’s relaxed confidence, talking about herself and how she became acquainted with Schreck – and how she empathized – augured well for the final segment of the show, where she’s called upon to be even more spontaneous and to interact with us. 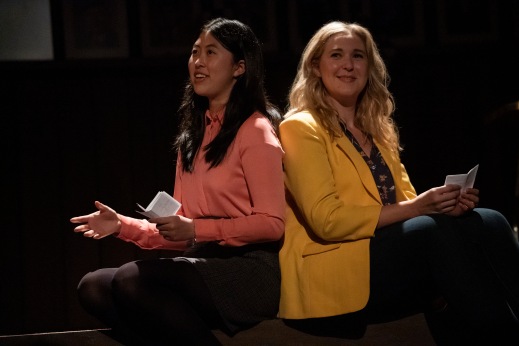 Depending on the performance you attend, Jocelyn Shek or Emilyn Toffler will stride forward to debate the following proposition: The United States Constitution Should Be Abolished. Each night, a coin toss will determine which side of the issue the participants will argue. Shek, who argued for keeping the Constitution, was a different breed of high-schooler than the Heidi we had seen, a little less high-energy, more focus, and abundant self-assurance.

By this time, adult Heidi has sufficiently faulted our Constitution to nearly make the debate over the future of this venerated document a fair fight. But every night, the audience decides which of the two debaters is the winner. How this happens I will not divulge, but I will say that I’m convinced this segment should more fully demonstrate how an imperfect participatory democracy really works.

Obviously, the primacy of our Constitution has been enhanced by last year’s bloody January 6 insurrection, compounding the relevance of Schreck’s script after it was already a 2019 Pulitzer Prize finalist. With its testimonies from the two actors, with its nightly debate, including a rapidfire Q&A when the debaters shot questions at each other contributed by a previous audience, Schreck has provided room for her show to breathe and flow along with the tide of changing events. Like the US Constitution.

As a framer of her own show, Schreck has clearly had more fun than the more famous framers did at the Constitutional Convention in 1787. So will you.