In the early days, when Quidam came to Lowe’s Motor Speedway in 2002, I was fairly besotted by everything Cirque du Soleil produced. That summer, my wife Sue and I took in two more Cirque spectaculars in Las Vegas, including my all-time favorite, the water-logged O at the Bellagio, still running 16 years later. We saw Varekai twice in 2005 under Cirque’s signature Grand Chapiteau big-top, up in the Jersey Meadowlands and at another Lowe’s Speedway engagement, before the Montreal-based company proved they could go wrong.

Going for a new kind of audience in a new kind of venue, Cirque brought Delirium to the Bobcats Arena in 2006 – a bombardment of loud music and projection screens targeted at rock concert enthusiasts. That abortion soured me on Cirque for a long time, keeping me away until they explored a new frontier in 2016 when they brought Paramour to Broadway, a Cirque du musical set in Hollywood. Pretty godawful.

Enter Corteo, now at the Spectrum Center. Or is it more accurate to say re-enter Corteo? For this show began life in the vintage year of 2005 under the Grand Chapiteau before its original director of creation, Line Tremblay, teamed with new creator and director Daniele Finzi Pasca to reincarnate Corteo as an arena spectacle in 2016. Pasca’s creds included the closing ceremonies at Winter Olympics in Torino and Sochi before he signed on with Cirque, so his addition was hardly a leap of faith.

The fusion is a smashing success, and I can declare Corteo fits as handsomely into the home of the Bobcats as any previous Cirque effort has fit into the big-top or a big Vegas hotel. Pretty impressive for an extravaganza that sets up, stages seven shows in five days, and eases on down the road. The acrobats, jugglers, and assorted other performers may fluff a stunt or two, but the show moves along with well-oiled perfection technically. Sound levels, lighting cues, projections, curtains, and various electronics never misfired on opening night.

Instead of bisecting the arena with a runway, as we saw in Delirium, Pasca and Tremblay plant a circular stage in the middle of the arena that flares out to the wings for entrances and exits. Up above, there are three railways handling more traffic: angels floating in the air, acrobats making dramatic exits, or even a clown riding a bicycle in his heavenly afterlife. Down below, there are concentric circles in the stage that can be triggered to revolve; people and objects that are standing still can glide across the stage or completely circle it. In the middle, there’s a circular trapdoor for sudden disappearances – or in one comical episode, the emergence of an elusive human golfball.

Plot is unabashedly zany. Along with quaint townsfolk and fluttering archangels, not to mention flowers and flickering candles, we gather around the bedside of an ailing Mauro the Dreamer Clown, who imagines – with absolutely no modesty at all – his own grand funeral cortege, his ascension to the heavenly spheres and, since he is a clown, a whole slew of circus acts and comedy shticks that punctuate the proceedings. The mock solemnity of it all had me thinking of the opening of Puccini’s Gianni Schicchi, to be honest. Beds and a trio of overhanging chandeliers quickly turn into acrobatic apparatuses as the gauzy curtains rise from the opening tableau. Amazingly, the more impressive exploits are performed on the beds and their fairly elevated side railings.

Of course, there are numerous other apparatuses waiting in the wings or up in the loading docks of those skyrails. Newcomers to Cirque will no doubt be enchanted by the multiple manifestations of the company’s signature aerial silks. The graceful climbing, the ritual wraps around the waist and legs, the precipitous fall from a great height, halted just before the acrobat can hit the stage and break her head, delights the crowd without fail – the younger the spectator, the better.

Simplicity and novelty are more likely to wow me now that silks and cirque have become synonymous. So the simpler solo on the suspended pole, upon which the supple acrobat levitated herself from seemingly impossible positions, including a sitting lotus (grasping the pole with only her crossed legs), captured my fancy more freshly. The flopsy artist marionette was another charmer, and I liked the novel couple plying the aerial ring. She occasionally held him up and kept him from falling. Or how about the man who entered with a ladder and nowhere to lean it? He climbed up anyway.

There were surreal and fanciful moments, of course, disembodied shoes clomping across the stage, a recalcitrant robot or two, and a panto Romeo and Juliet with midget lovers. Undoubtedly the oddest and most unexpected segment was when The Clowness, one of those adorable midget clowns, floated in with a cluster of ginormous helium balloons. Mauro, presiding over this apparition, flung her out into the audience, encouraging us to bop her back and forth for a while before calling on us to return her.

It wasn’t as easy as it looked, I can tell you that. Grabbing hold of her shoes by the toes and launching them back toward the stage, I only succeeded in bending The Clowness’s legs as her momentum carried over my head and deeper into the crowd. During the split second that it was in my hands, the whole rig felt heavier than it looked. Much heavier. I wasn’t surprised when Mauro told the other side of the arena, when it was finally their turn, that it had taken 20 minutes to get The Clowness back onstage the previous night. 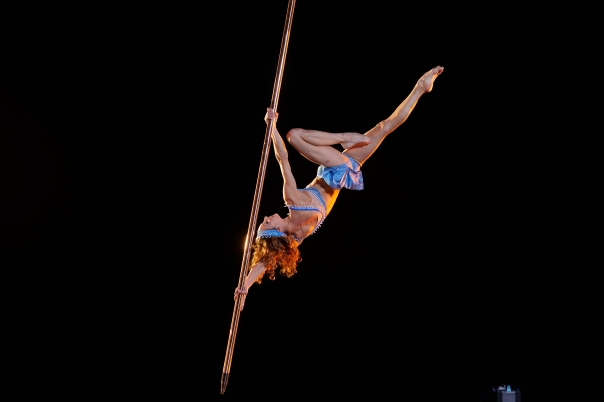 Though the inevitable accordion hasn’t been banished from their circus vibe, music by Jean-François Cote, Philippe LeDuc, and Maria Bonzanigo widens the palette compared with the soundtracks I had collected from Quidam and Varekai. There are outbreaks of Dixieland ensembles now with a wailing soprano sax, a quiet Spanish guitar accompanies the impassioned vocal behind the suspended pole solo, and the ringmaster, Mr. Loyal, is as likely to sing a snippet from Rigoletto as he is to display his whistling talents – while percussionists on crystal glass and Tibetan bowls circle around him. Kudos to the composer or composers who joined the team for this arena remount.

Through misdirection and precise timing, Pasca and lighting designer Martin Labrecque utilize the darkness of the arena to create sudden dramatic entrances, where performers suddenly materialize in plain sight. Whether the Little Angel is teaching Mauro how to fly or the dreaming clown is bicycling through the clouds, Pasca and Labrecque also nail the heavenly episodes.

Many of the plot points and character sketches that I found in Cirque du Soleil’s press kit are wishful thinking rather than faits accomplis in terms of playing to a real-world audience. Doesn’t matter. In its own sweet way, Corteo is epic.