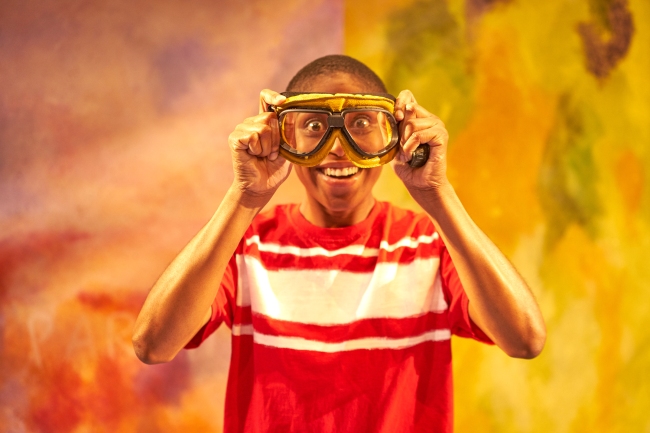 Faced with the problem of turning Ezra Jack Keats’ children’s classic, The Snowy Day, into an hour-long stage production, Children’s Theatre of Charlotte and adaptor Jerome Hairston have resisted the temptations of bloating the story with needless pabulum or stretching it with irrelevant songs. Instead, they’ve balled up the original story Keats wrote about Peter with subsequent titles he wrote about his urban hero – including Whistle for Willie, Goggles! and A Letter to Amy – into a sizable snowball.

The mighty tetralogy ran a lordly 44 minutes at the performance I attended. Gauging by the delighted reception I saw last Saturday afternoon, I’d say both the length and the treatment were ideal.

Both the scenic and costume design, by Alessia Carpaca and Ketti Shum Mcrae respectively, seem eye-poppingly close to the original Keats illustrations, especially the iconic red snowsuit. Stage director Mark Sutton seems to have horded all the latitude – and fun – to himself before generously divvying it up among his cast.

All of them seem to having a great time at the Wells Fargo Playhouse in ImaginOn. Lydia Williamson not only gets to regress into childhood, she also swaps genders to play Peter in all four stories. Crunching the freshly fallen snow, puffing up agonizingly in attempts to whistle, sporting new goggles Peter is lucky enough to find, and stressing over his birthday invitation to Amy are all prodigious romps for Williamson to feast on. 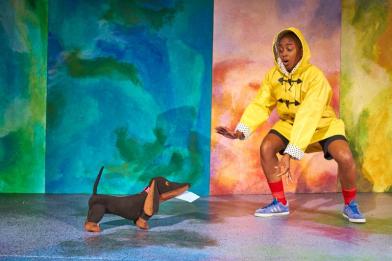 Abigail Aukerman has the most chameleonic outing, appearing as Mom from time to time when she isn’t branching out into neighbor kid Archie and first crush Amy. Ron Lee McGill remains Dad in an oddball straw hat, hardly changing at all when he’s propelling Peter’s dopey dog, Willie. McGill also gets to chip in some narration – and assorted stagehand work while Peter’s adventures are in progress.

Much of the comedy works because we view it from an older, wiser perspective. We know what will happen when Peter stomps into the snow, though Sarah Tundermann’s projections are a nifty confirmation. And we can anticipate Peter’s heartbreak when he wakes up in the middle of the night and discovers that the snowball he stowed away in the pocket of his snowsuit that afternoon has vanished. How does that happen?

So it’s nice to find that nobody in The Snowy Day And Other Stories is cajoling us to participate or react. We take it all in privately, frequently laughing or marveling at what we see. That’s exactly what Peter is doing, except for those delicious moments when we’re a couple of steps ahead of him.