Last year, when I passed up my first opportunity to see Dirty Dancing at Belk Theater, I had this naïve idea that it would be a musical adaptation of the 1987 film starring Patrick Swayze and Jennifer Grey. With the return of the national tour Charlotte, this time at cavernous Ovens Auditorium, I persisted in my folly long after the curtain rose. Silly me, I overlooked the fine print in my playbill under the florid romance novel italics of the Dirty Dancing logo: “the classic story on stage.”

So as the action unfolded, with a live eight-piece band perched above the scene at a Catskills country club, months before the JFK assassination, I was expecting Bronwyn Reed and Christopher Tierney to sing. Reed is “Baby” Houseman, a privileged lass on vacation with her parents and sister. The eponymous club owner of Kellerman’s wants to match Baby up with his grandson, Neil, who professes to have activist sympathies that are in tune with hers. Nevertheless, it is Tierney as Johnny Castle, the dance star of the Kellerman’s floorshows, who dazzles her.

All of the women – including some of the wives – are drooling over Johnny, but he seems to be the property of his dance partner, Penny. Not so. What clears the way for Baby to get closer to Johnny is a Penny catastrophe. As a result of a recent indiscretion – and the clandestine surgery required to fix it – Baby has three days to replace Penny as Johnny’s partner for a gig at a nearby hotel. 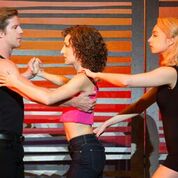 So there are opportunities here for plenty of music and singing as Baby trespasses into the world of the déclassé entertainment staffers, empathizes with Penny’s plight, and endures the grind of intensive rehearsals with Johnny, maybe the hardest honest work of her whole life. Body heat is amped up on the live stage to a level that celluloid can’t compete with as Johnny and Baby slither closer and closer, inevitably intertwining, and music from up in the bandstand is more constantly in the background. But despite the heat and the beat, these dancers never sing.

I expected Reed to sing because the curly Jennifer Grey hairdo (or wig) wasn’t especially becoming for her and her dancing, which is supposed to be stiff and tentative at the start, never evolved to spectacular, lingering at merely proficient. Why cast this Baby if she couldn’t belt?

Yet I was far more eager to hear Tierney. Not only does he have a rugged, muscular, sensitive, and sensual stage presence, his speaking voice has the rich, deep grain of a finely polished briar pipe, promising a liquescent baritone. Instead of our leads, Jordan Edwin André as Billy, an incidental character, shares the live singing chores with Chante Carmel as Elizabeth, an add-on character.

Less awkward than these musical shifts are Eleanor Bergstein‘s dramatic add-ons to her screenplay. Her stage adaptation inserts some friction by between Baby’s dad (Jon Edward Powell), the physician who actually saves Penny from the quack, and her mom (Hannah Jane McMurray), who sees similarities between Johnny and her husband that the good doctor misses. The resolution of that conflict enriches the reconciliation at the end.

So does watching it live. The sequence, first on a log and later on a lake, where Johnny spends their last day of rehearsal teaching Baby their lifts, pales on stage in front of some clunky projections compared to location shots crafted on film. But when they finally achieve those lifts, center stage and live without retakes or a net, it was not only breathtaking but also unexpectedly moving, wiping out the bathos of those earlier projections.

Yet it has to be said that part of why the closing scene is so surprisingly moving is the absence of any comparable emotional peak before then – the kind of peaks that heartfelt singing duets can help to create. The best comic relief comes from Alyssa Brizzi as the younger sister, giving us a heftier chunk of her cheesy Hawaiian number at the final soiree. Otherwise, the only other standout was Jennifer Mealani Jones as Penny. It hardly takes five seconds to realize that she’s an ace dancer.