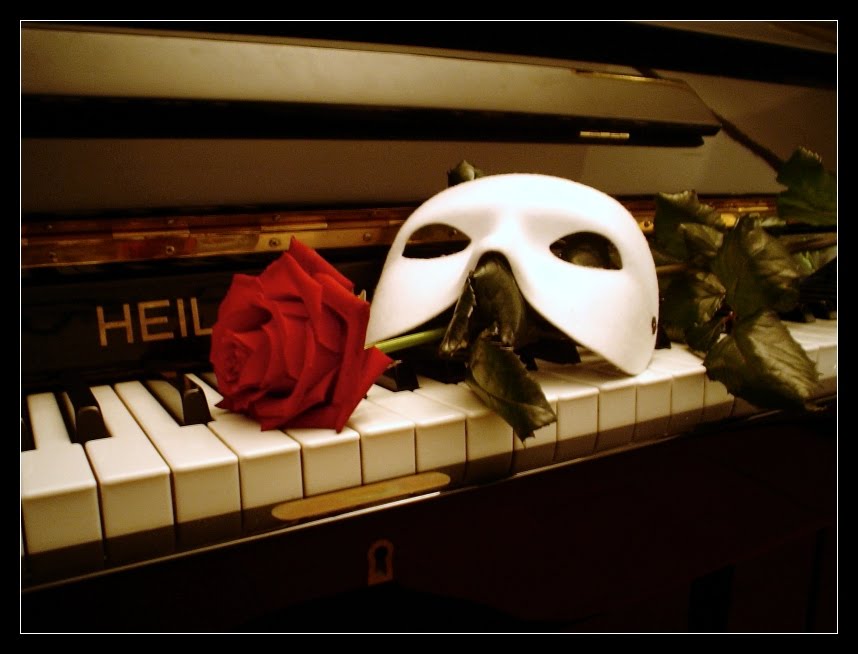 Celebrating their 10th anniversary at Halton Theater, CPCC has found the perfect way to outdo anything they’ve attempted there before. With their current production of Andrew Lloyd Webber’s The Phantom of the Opera, CPCC Theatre – teaming up with CP’s Opera Theatre and Dance Theatre – have achieved one feat that even the original Broadway production, now in its 28th year, can never claim: they’ve sold out every performance in the run.

With that unprecedented presale, it’s safe to say that the longest-running show in Broadway history is a powerful brand. But how close can this community college’s Theatre-Opera-Dance alliance come to fulfilling those towering expectations? Closer than I would have predicted.

The technical demands are prodigious, beginning with the iconic Paris Opera House chandelier that lifts off the stage at the end of the Prologue and comes crashing down at the Phantom’s summons, cuing the intermission. You watch the CP production, and even when it doesn’t quite measure up to Broadway original or the two touring versions, you marvel at the audacity and prodigality of an effort that will only be in town for 10 days.

Sure, the chandelier looks a bit like an oversized Chinese lantern, a flimsy Horn & Hardart affair compared to the ritzy glitter that has floated over the Belk in recent incarnations. But I was more intimidated when this trinket was hoisted above me at the Halton. Awesome and cheesy also go hand-in-hand in Robert Croghan’s set design. Although the gloomy staircase leading down to the subterranean lagoon was unimpressive, Croghan’s evocation of the Phantom’s lair is gothic splendor, and the boat that carries Christine Daaé to and from that dungeon is magical.

Like the recent SlimFast remake of the touring Phantom that came to the Belk back in February, CPCC has liquidated the majestic stairway that wowed us in the Broadway concept of the Act 2 opening scene. But at this New Year’s Eve masquerade, we have the most conspicuous consumption of yard goods in the eye-popping costumes by Croghan and Jamey Varnadore, a rainbow of colors that fills the Halton stage. Arm-and-arm with the cardboard elephants, all of the opera costumes radiate a musty Elizabethan authenticity.

Some of the things that fall short at CP point up the niceties we’ve probably overlooked before, like the cunning of those multiple levels built into the auction scenery of the Prologue. Without it, the chandelier plopped onto the centerstage foreground blocked my sightline for the latter moments of the scene before it was borne aloft. Raoul’s presence in that scene was merely hearsay to me.

Saturday night’s misadventures with Don Ketcham’s technical effects also underscored the effortlessly-overcome challenges we take for granted when we treat ourselves to a Broadway production or a topflight tour. Snow that was intended to fall on the rooftop scene stopped abruptly after a mere 10 seconds. All the onstage fireworks went off flawlessly, covering the Phantom’s disappearances, but I seemed to hear an extra explosion backstage that was surely accidental, and the final vanishing through the Phantom’s chair was laughably botched. When Christine slammed a cup down in her climactic opera scene, it broke like one of those two-piece disposables you buy at a dime store, another unintentionally comical moment.

All of those things will be cleaned up by the time the run resumes on Wednesday, right? Already admirable are the sound designs by Steve Gamble. We customarily shout hosannahs when the much-maligned Halton sound system desists from assaulting us with sonic dropouts, body-mic thumping, and screechy feedback. In this landmark Phantom, the demons of yore are more than merely exorcised. They are supplanted by profusion of echo effects that add a charming, ethereal luster to the whole evening. I can’t say that I hear all the contrapuntal parts of the sextet scenes in the Paris Opera manager’s office, but the unamped voices of Opera Carolina principals can be just as murky at the Belk when Puccini and Verdi veer into counterpoint.

More than any of the touring productions I’ve seen, CP’s version vividly reminds me that Webber’s Phantom really is an opera – perhaps because Opera Theatre’s guiding light, Rebecca Cook-Carter, wields the reins on musical direction. She certainly has some wonderful voices at her command, including her own as aging prima donna Carlotta Guidicelli, distinctly audible in every ensemble with a vibrato that spans two time zones. Down in the pit, I counted 25 desks and keyboards – more than you’ll find at most Broadway productions nowadays – but the program actually lists 33 musicians, all of them zestfully led by former Charlotte Symphony resident conductor Alan Yamamoto.

You don’t want to do this show without synthesizers that convincingly render the Grand Guignol sound of a mighty pipe organ. Mission accomplished there.

Aside from the quality of the lead voices, I need to mention their commitment. Listening to the duets between Ryan Deal as The Phantom and Anna Belle Lusk as Christine, it was difficult to overlook the probability that singers who get to perform these roles just eight times – or a precious four in the case of the double-cast Lusk – pour far more passion into it than leads who have rendered these same roles hundreds of times before with additional months and years ahead. It was striking to hear “The Music of the Night,” “Angel of Music,” the title song, and even the choral “Masquerade” attacked so freshly.

Lusk’s exertions did convince me of the prudence in double-casting the role of Christine, and you’ll be totally satisfied if Karley Kornegay – who opened last Friday – is nearly as fine. Completing the complex love triangle as Raoul, Matt Carlson has matured astonishingly, shedding the rocker swagger that has served him so well in musicals from Aïda to Rock of Ages and becoming a standard-issue Broadway leading man.

The dungeon denouement crackles with excitement as the three purest voices wail way against the show’s most impressive backdrop. Nor are you likely to forget the lovers’ escaping on the underground lake, Carlson’s and Christine’s voices echoing in the distance with the despairing disfigured Phantom in the foreground. Kudos to Jason Estrada for the make-up and wig design.

As opera idol Ubaldo Piang, Robert Piang is wonderfully paired with Cook-Carter, nearly matching her grandiloquent excess. Disdaining the mugging that usually makes the Paris Opera’s new owners so obnoxious, Eric Johnston and Chris Chandler only slightly rob the Phantom of the sympathy due to a mad composer.

Amid all the color, pageantry, and pyrotechnics, it’s easy to overlook the contributions of choreographers Ron Chisholm and Clay Daniel with CP’s Dance Theatre corps. Not only does Christine emerge from the Paris Opera’s little ballet chorus, so do the Girys, dancer Meg and her stern maman, Madame Giry. As Meg, Aubrey Young gradually recedes into the background while her friend Christine’s star rises – but Meg is luminously the last person we see. Kristine Reynolds is a more constant, powerful, and sinister presence as the dance mistress, dressed in black and imperiously pounding her staff. Fittingly, there’s a mystery to her, Judith Anderson mixed with Gandalf, for she alone knows the secret origin of the crazed Phantom and the subterranean region where he dwells.