Reviews of Grace for President and Fall Works

We’ve been favored with a couple of Grace shows from Children’s Theatre over the years. There were two productions of Amazing Grace, a charming but trifling little piece, in 1999 and 2005. Before the encore, there was the incomparably richer Boundless Grace, deeply infused with African rhythms and culture, that won Creative Loafing’s Show of the Year laurels in 2000. 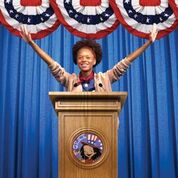 So for those of you who recall those pre-ImaginOn productions, it may be important to emphasize that there’s no kinship between them and the current world premiere of Grace for President through November 6. Mary Hoffman created the previous Grace, of Gambian descent, in a series of books that depicted her heroine with playacting impulses rather than political ambitions. Grace Campbell is a more recent brainchild by Kelly DiPucchio, slightly browner in LeUyen Pham’s illustrations than her Woodrow Wilson Elementary teacher, Mrs. Barrington, but never assigned to an ethnic group.

From the first page on, DiPucchio’s Grace is more about feminism than racial pride. Mrs. Barrington brings a poster to class at the start of the school year with all the US presidents on it, and Grace asks, “Where are the GIRLS?” After getting the lowdown, Grace stews at her desk momentarily before announcing that she would like to be president. Despite the snickers from several of Grace’s classmates, Mrs. Barrington deems this impromptu ambition to be a “star-spangled idea” – clear proof that DiPucchio intended her story as a musical all along.

Clocking in at 57 minutes, Joan Cushing’s adaptation actually expands upon DiPucchio’s slender volume, with a robust – and resourceful – song list. When Grace starts campaigning against Thomas Cobb, the nominee from Mr. Waller’s class, Grace and Thomas sing in debate-like counterpoint, not harmony, each candidate spouting a separate line. And while it’s doubly lamentable that a two-party system is axiomatic in this story and that genders represent the party lines, when the guys sing “Boys Boys Boys,” it rings like a barbershop quartet.

Cushing does churn out some pabulum along the way in explaining what elections are, but she bravely follows in DiPucchio’s footsteps in trying to explicate that grim Founding Fathers albatross, the Electoral College. We skim over some fairly muddy waters when Barrington and Waller establish a system where each of their students represents one of the states, unevenly weighting their votes.

The outcome partly redresses the inequity. Cobb seems to have a lock on the election because the boys hold the majority of the electoral votes. Our intrepid heroine therefore comes up with a platform designed to change some minds, listening to her classmates while Cobb mainly coasts. Party lines have held fast when we reach the end of the roll call of states, so the election is still up for grabs as Sam, representing Wyoming, gets set to cast his measly three electoral votes.

“My vote counts!” Sam sings out, an epiphany yet to be reached by millions of unlikely American voters.

I won’t tip the results of this suspenseful election, but I’ll credit set designer Anita J. Tripathi with heightening the tension by dropping down an electronic scoreboard over her gallery of presidents to give us a running total of electoral votes until the confetti moment when the shunned wallflower Sam makes his decision. We’re supposed to greet the result with jubilation, but overall, the students of Woodrow Wilson Elementary are even more set in their voting patterns than adult Americans.

Although director Michelle Long pilots the most polished production I can remember at Wells Fargo Playhouse (the smaller ImaginOn theater), I found myself fighting the notion that this wasn’t really a Charlotte production. Most of the seven-member cast is new to the Charlotte scene, all except one are making their first 2016 appearance, and all the designers seem to be making their Uptown debuts.

Youngsters shouldn’t have any problem warming up to Talia Robinson as Grace. Her sunny optimism in launching her campaign is only slightly clouded by the prospect of opposition, and Robinson’s attitude toward her classmates usefully blends the callings of public service and leadership. After starring last December in the title role of another Cushing world premiere, Ella’s Big Chance,  Margaret Dalton as Mrs. Barrington is the most familiar face we encounter. She gives us that ideal teacher we never had, not only radiating energy and encouragement but also drawing inspiration from her pupils’ ideas.

The other Ella alum in the cast, Sean Powell, infuses Thomas Cobb with a patrician smugness as he initially intimidates Grace, singing his own praises in “My Accomplishments.” Until the denouement, Powell keeps the concept of doing for others totally alien to Thomas. Shivam Patel’s debut as the outcast Sam is as impressive as Robinson’s, for suffering often has deeper roots than righteous indignation. While Grace is affirming that girls can now win as never before, Patel makes Sam’s discovery that he matters just as heartfelt and liberating.

While the script is intended to remain serviceable for election years to come, there was one aspect of this world premiere bears the fresh fingerprint of 2016. A couple of errors that were noted in the Observer review on Friday morning had been expunged from the script by the time I attended the Saturday afternoon performance. Politicians may resent fact-checking during their hotly contested 2016 races, but playwrights and theatre directors evidently don’t.

As Charlotte Ballet launched its 2016-17 season, the final season for Jean-Pierre Bonnefoux as president and artistic director, one thing became very evident during the Fall Works program: Bonnefoux’s successor won’t need to do any rebuilding. I’m not sure I’ve ever seen so much energy expended by so many dancers so brilliantly. Five of the 18 dancers we saw are new to the troupe this year, and one – a soloist! – was recruited from Charlotte Ballet II, the company’s apprentice ensemble. 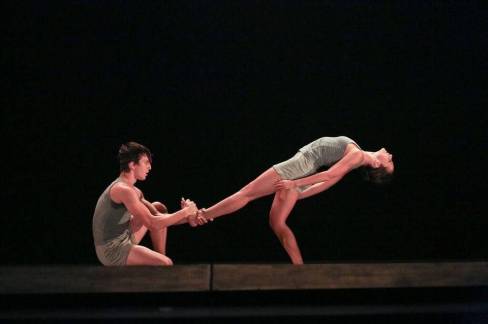 When we first saw Dwight Rhoden’s rousing paean to 80s club culture, The Groove, kicking off the 2012-13 season at Knight Theater, it was almost exhausting to watch at the end of that program. This year, it led off the evening in the you-ain’t-seen-nothin’-yet slot, no less astonishing in its unflagging exuberance than it was before. Surely newcomers to Charlotte Ballet performances must have been wondering how they could follow such a barrage of fast-paced bravura.

Those of us who had seen Ohad Naharin’s Minus 16 at Spoleto Festival USA had no such worries. Part of the wildly varied suite came to Charleston when Naharin’s Batsheva Dance Company made its Spoleto debut in 2007. Alvin Ailey American Dance Theater brought the full suite to Spoleto in 2012 – shortly after their stopover at Knight Theater!

The spectacular core of the work is Naharin’s setting for the traditional Passover seder song, “Echad Mi Yode’a,” in a frenzied recording by The Tractor’s Revenge. It’s a song that cycles to 13 in much the same way that stanzas to “The 12 Days of Christmas” expand. Instead of ending with a “partridge in a pear tree,” each of the Hebrew stanzas concludes with “our One God in the heavens and the earth.”

Naharin sits 18 dancers in semi-circle before us, all of them clad in black suits, white shirts, and black fedoras, emblematic of Israel’s ultra-orthodox Jews. Each time we reach the end of a stanza, 17 of the dancers rise to their feet in a prayerful wave that sweeps the group from left to right. The eighteenth dancer catapults himself to the floor in an epic flop, as if shot from a cannon – or flung from the explosion of a terrorist bomb.

Each number draws a new signature movement from Naharin as the stanzas grow longer. Each stanza ends with the same wave and explosion as we proceed toward 13, all the dancers returning to their chairs to start each stanza. What I called the “regimented hysteria” of Naharin’s choreography is compounded as we draw closer toward the end, for the “black hat” Hasidim do the unthinkable: they begin throwing more and more of their clothing into the air until all their outer garments – from hats to shoes – lie in a chaotic pile in front of them. Unforgettable.

One of my grandfathers was a Hasid. I’m certain that if I’d seen him in his underwear, I would have been cast straight down into Gehenna.

Yet the suite began innocuously – and comically – with Maurice Mouzon Jr. from Ballet II standing in front of the stage at intermission, morphing from motionlessness to tentative dancing to bodacious acrobatics before the ensemble’s prelude to the core ritual. Things lightened up immediately after the mass rending of garments, with a bouquet of Harold Arlen songs and some truly hilarious – and spontaneous – hijinks with Dean Martin’s “Sway” as the prime backdrop.

All of the troupe came out into the audience and chose partners whom they led onto the Knight stage. A block party broke out with a cornucopia of delights: sensuousness, grace, shyness, awkwardness, and hambone scene-stealing were all abundantly on display. Nor was the fun finished when patrons were sent back to their seats and the dancers took their bows. The crimson curtain kept rising and falling, each blackout hatching a new zany tableau.

Not all of the hambone came from the amateurs, that’s for sure.