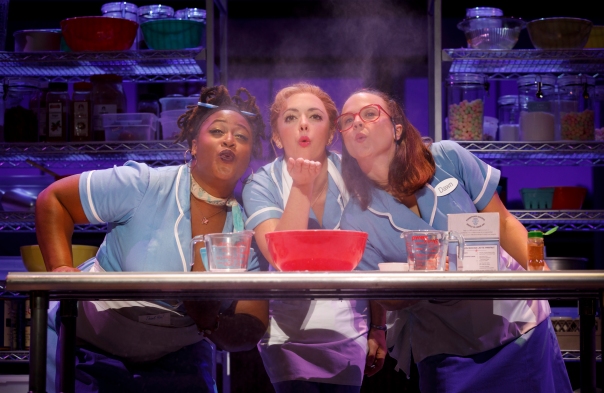 Like the gentle raindrop patter of its opening song, “Sugar… butter…water,” the musical adaptation of Waitress promises a delicious, delicate, and transient chemistry that sensitively parallels the formation and breakup of romantic relationships. As the motif repeats in the music and lyrics of Sara Bareilles’s score, we get some extras from its troubled protagonist. Jenna not only waits tables at Joe’s Pie Shop, she also bakes the pies. And she not only falls in and out of love, she also experiences personal growth through the alchemy of motherhood.

Unfortunately, delicacy and sensitivity pretty much run dry in Jessie Nelson’s adaptation of Adrienne Shelly’s screenplay after they’ve been lavishly applied to Jenna. Earl, Jenna’s husband, is about as toxic a redneck as you could imagine, a brutal grungy sponge who gets one song to match his one dimension. Jenna’s two waitress cronies are sunnier, to be sure, but hardly more rounded: Dawn is kooky, mousy, and shy, contrasting with the swaggering and smart-ass Becky. All three waitresses have man problems, and all three will wind up with new men. Along the way, Jenna and Becky can commiserate on the folly of having sex with your husband while Dawn is hooking up with Ogie, who is even weirder than she is, presumably because she has cured his shyness in five minutes or less. As Ogie, Jeremy Morse draws the liveliest song of the evening, “Never Ever Getting Rid of Me.” But as if to punish Morse for this goofball showstopper, Bareilles later saddles him with “I Love You Like a Table,” which is every bit as silly as its title.

The folly of having sex with her husband sends a ready-to-puke Jenny to the ladies’ room, where she and her co-workers await the results of a store-bought pregnancy test. Gloomy with the news that she’s having Earl’s child, Jenna soon appears at her gynecologist’s office bearing one of her most special pies as a gift – only to learn that the woman has retired, replaced by Dr. Pomatter, an agreeably awkward new man in town. We know what will happen between the two of them before they do, and Maiesha McQueen, in a comical cameo as his Nurse Norma, gets to swipe a couple of Jenna’s subsequent gift pies. Although Earl berates her pie-making, Jenna schemes to escape him and his bullying, tucking away some of her tip money so she can take the train to a statewide baking contest where her pies could win her a $20,000 prize and a new life. Dr. P and Nurse Norma seem to be the biggest fans of Jenna’s daily specials, yet she also gets encouragement from her best customer back at the shop, Joe himself. But the backbone she needs to finally stand up to Earl must come from within.

Desi Oakley manages to keep Waitress grounded even when Bareilles’s songs and Nelson’s outré characters take us away from the story’s countrified Southern heart. After extended absences, an irresistible country twang enriches Oakley’s voice and we’re back home. Maybe she’s a tad too beautiful for this pie-making savant, but when Oakley sings “She Used to Be Mine” deep in Act 2, Jenna’s journey is laid bare and she sounds genuinely fed up with her recurring mistakes.

Among the other characters, only Joe sounds capable of comparable introspection, and Larry Marshall makes the pie fancier’s “Take It from an Old Man” another highlight. Dr. Pomatter reaches maximum depth when he urges Jenna to teach him the rudiments of making pies. More often, Bryan Fenkart is called upon to emphasize the furtive and fun-filled regions of romance, light on the comedy because he’s a physician and light on the intimacy because he’s married. 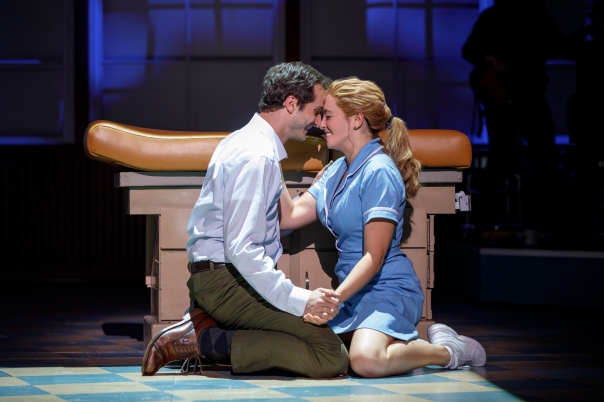 The first of Fenkart’s three duets with Oakley, “It Only Takes a Taste,” is undoubtedly the best, but none of them match the country flavor of the three waitresses when they harmonize. “Opening Up” is the yummiest of these trios, but Lenne Klingaman as Dawn and Charity Angel Dawson as Becky each gets a chance to shine alone. Nervous before first date – in approximately forever – Klingaman has a better vehicle in Dawn’s “When He Sees Me” than Dawson’s defiant “I Didn’t Plan It” when she slips into an extramarital romance.

Of the two brutes in the story, Ryan G. Dunkin was by far the most benign as Cal, the pie shop manager. After fuming about his crew’s tardiness and threatening to fire Becky, the biker beast turns out to have a soft side. Though Earl begs Jenna not to leave him at one point, it’s an inexplicable lapse in his customary physical intimidation and verbal abuse, so I quickly found myself dreading every scene where Nick Bailey showed up as Jenna’s noxious husband.

The heavy-handedness of this touring production doesn’t altogether vanish when Bailey exits, for the soundbooth, more often not, overmikes the singers onstage, especially the women. When there was actual exposition involved, as when Jenna reminisced about her upbringing in “What Baking Can Do,” I couldn’t get the gist live and needed to catch up at home with Spotify. On the other hand, the six-piece band led onstage by John Miller was very tight, and while the lighting by Ken Billington could have benefitted from more variety, set designs by Scott Pask whisked us smartly from one smalltown location to another.

Before curtain-rise, a huge cherry pie with crisscrossed dough on top filled the stage at Belk Theater all the way up to the proscenium, and the near-capacity crowd on opening night was inclined to eat it all up. Waitress will hit your tastebuds with down-home delight if you downsize your expectations.