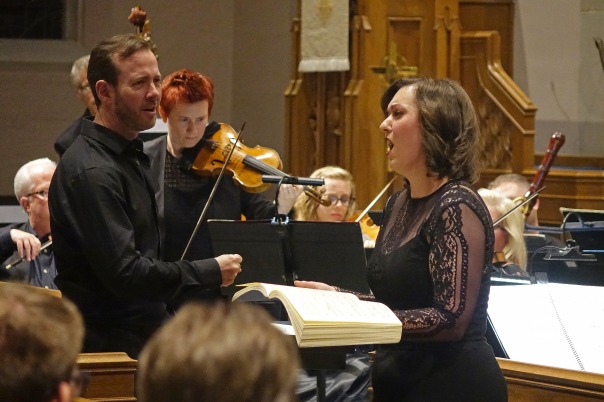 The most dramatic moment at the second annual Charlotte Bach Festival may have been a moment of silence – at the climax of the St. Matthew Passion, after Bach’s Evangelist had declared that Jesus had died. Festival conductor and artistic director Scott Allen Jarrett maintained that silence longer than any I could remember on a recording or at a live performance, including Jarrett’s own with the Charlotte Symphony in November 2013.

After this loaded interlude at Myers Park Presbyterian Church, like the world itself coming to a halt, the BA|Charlotte Cantata Choir was exquisitely empathetic and hushed singing, “Wenn ich einmal soll scheiden, So scheide nicht von me” (When I depart one day, do not depart from me). The chilling desolation of this reaction was all the more poignant because of the power that the 25 singers in the Cantata Choir had poured forth just minutes earlier in mocking and taunting the crucified Jesus as he was dying on the cross.

There had also been power aplenty from the soloists, as we were quickly reminded after the prayerful choral lament, when tenor Stephen Soph as the Evangelist continued Matthew’s narrative – with the rending of the Holy Temple, the earthquake, the opening of graves, and the rising of the dead upon Jesus’ death. No less powerful as Jesus, baritone Jason Steigerwalt’s most memorable singing had come in his Part I recitatives, at the Last Supper and during the subsequent episodes leading up to his arrest on the first day of Passover. Of course, his last words, “Eli, Eli, lama asabthani?” had a special plaintiveness.

With Jarrett’s past and present connections to the Oregon Bach Festival, the Handel and Haydn Society, Seraphic Fire, and Charlotte Symphony, the high quality of the Cantata Choir – and the instrumental and vocal soloists he can lure to Charlotte – is not at all surprising, even if their power and dynamic range can sometimes come as a shock. All 22 of the core members were accorded extended bios in the rear of the festival program booklet. Additional space was carved out for the four Vocal Fellows who fortified the Choir during the Passion and figured prominently in the midweek, midday Bach Experience performances of two Michaelmas cantatas, Nos. 19 and 149. 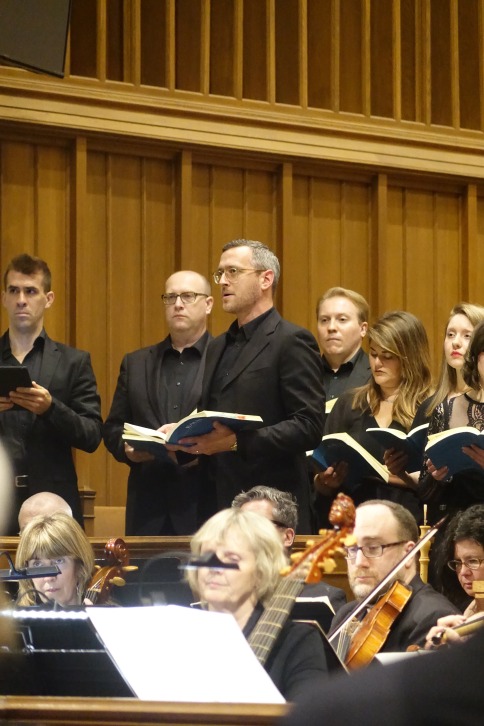 Since both the core singers and fellows were chosen by Jarrett from nationwide talent pools, it wasn’t surprising that soloists singing the Passion arias were on the same level as those who had sung for Jarrett in 2013. What astonished me more was what soloists from a reduced core Choir had achieved the previous Saturday night when they performed Bach’s Magnificat at the festival’s Opening Celebration. Overall, performances at the more intimate Christ Church by sopranos Sarah Yanovitch and MaryRuth Lown, mezzos Elizabeth Eschen and Kim Leeds, tenors Patrick Muehleise and Gene Stenger, and baritone Steigerwalt had equaled or surpassed those I’ve heard on recordings conducted by Helmuth Rilling, John Eliot Gardiner, and Masaaki Suzuki.

There were additional soloists awaiting their turns at the Celebration when another Michaelmas cantata, No. 130, followed the Orchestral Suite No. 2. These included the sweet-voiced tenor David Kurtenbach, who would sing the recitative and aria at the Matthew Passion during the High Priests’ interrogation of Jesus, and – more impressive yet – bass-baritone Charles Wesley Evans, who would take the stage at the Passion in the wake of Judas’ remorse and suicide, transforming after the touching “Gebt mir meinem Jesum weider!” (Give me my Jesus back!) into the role of Pontius Pilate.

Other superb choristers stepped forth at Myers Park Presbyterian who had not soloed during the Opening Celebration. Most conspicuous was countertenor Jay Carter, whose recitatives and arias suffused the most intense episodes of Part II with sublimity and pathos, during the scourging of Jesus and at Golgatha, the site of the crucifixion. Edmund Milly, who hadn’t sung at the Celebration, didn’t get his first solos until Simon of Cyrene carried the holy cross, lavishing his rich bass-baritone on “Komm, sübes Kreuz” (Come, sweet Cross), with a viola da gamba obbligato from Gail Schroeder. We had no sampling of soprano Margaret Carpenter Haigh’s silvery lyricism until Jesus was brought before Pilate and she sang her recitative and the “Aus Liebe will mein Heiland sterben” (Out of love my Savior wants to die) aria, with traverso flutist Colin St. Martin playing the intro and obbligato. St. Martin’s work at the Celebration in the Orchestral Suite No. 2 had been even more substantial and impressive.

Five other members of the North Carolina Baroque Orchestra played obbligatos with Cantata vocalists, none more ballyhooed than concertmaster Aisslinn Nosky, who made gorgeous music together with Leeds in the mezzo’s “Erbarme dich” (Have mercy) aria. Following in the footsteps of cellist Guy Fishman, Nosky had been the second Handel and Haydn Society principal in successive years to perform at Charlotte Bach’s Visiting Artist Recital Series. In partnership with the American Guild of Organists, the festival presented Isabelle Demers as their other recitalist. The big improvement here was a change from the Uptown location at St. Peter’s Episcopal, where Bálint Karosi had performed, to Myers Park United Methodist. Not only did the chocolatey organ sound marvelous, it was at the front of the sanctuary, where we could actually see Demers play without having to turn around awkwardly in our seats.

Keeping with the precedent set by last year’s recitalists, both Demers and Nosky expanded the scope of the festival beyond all-Bach. Demers branched out into organ works by Alkan and Widor, and Nosky brought us a Fantaisie for Solo Violin by Telemann as well as two sections from Stand Still, a piece written for her by Michael Oesterle. Funkier by far, Charlotte Symphony trombonist Tom Burge inaugurated a new Bach at the Brauhaus event in the back room of Free Range Brewing on a wee stage that seemed, with its string of carnival bulbs and crimson curtains, best suited for magic acts or stand-up comics. Between sips of the pub’s brew – and banter from the audience – Burge played a Bach transcription, selections from Bone Kill by Michael Davis, and after slyly fishing out a euphonium from behind the curtain, Paganini’s most famous Caprice. 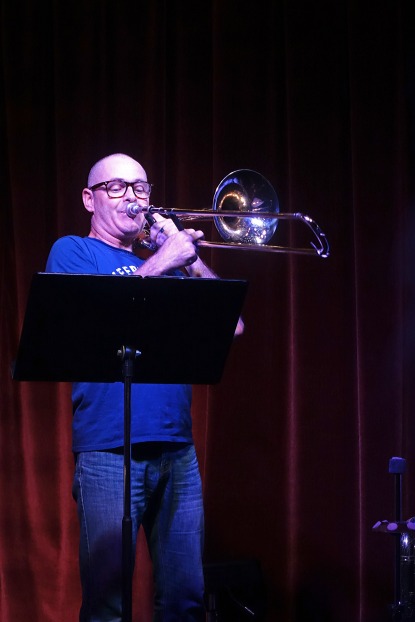 Nosky’s appearance was another kind of departure from last year, extended so that she could linger and gently whip the NC Baroque’s strings into sharper shape for the Passion – and to help in spreading the festival to Chapel Hill, where the masterwork was given at University United Methodist before its closing night performance in Charlotte. The were fewer hired guns brought in from afar to fortify NC Baroque than came to sing with the Cantata Choir, and the Passion ensemble was a lean-and-mean 32, including Nosky and organist Nicolas Haigh.

The anemic organ Haigh contended with was the only fault I found with the Baroque Orchestra, not their SlimFast number. Playing on period instruments, the company places a greater premium on authenticity – and precision – than on raw power, which is fine with me. When added muscle was needed, Steven Marquardt and Josh Cohen shared leadership of a corps of valveless baroque trumpets that bloomed gloriously in the Magnificat to launch the festival and in three Michaelmas cantatas afterwards. And just before the halfway mark at the Passion, a 10-voice children’s choir from Charlotte Latin School briefly appeared.

Never too big, and never too small. When the Cantata Choir and the Orchestra reached the final “Wir setzen uns mit Tränen neider” (We sit down with tears) of the Passion, there was soothing lullaby aspect to the music that overshadowed the usual community lamentation we hear from larger groups. Tuning in to the “rest gently” motif later in this chorus, Jarrett likely had that restful aim in mind when he hushed his forces once again. That was also fine with me. Very fine.