Reviews: The Strange Undoing of Prudencia Hart, Borders, and The Flying Lovers of Vitebsk 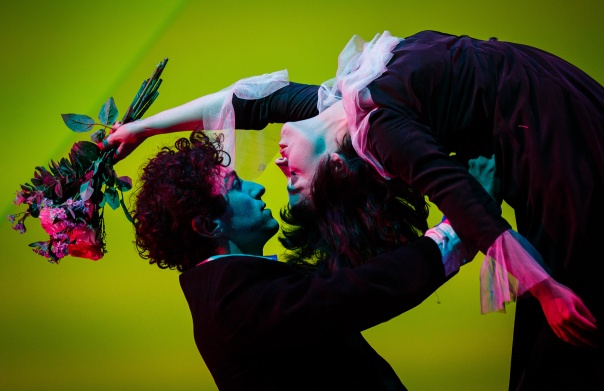 Theatre has gotten a looser, more guerilla feel to it at Spoleto Festival USA now that Woolfe Street Playhouse has established itself as one of the festival’s main venues. Unlike the storied Dock Street Theatre, where a flagship production gets 17 performances each season – plus a preview night – Woolfe Street can be reconfigured to accommodate cabaret and theatre-in-the-round presentations. For one-person shows, like a Taylor Mac extravaganza, it’s a better fit than the Emmett Robinson Theatre at College of Charleston.

So it figured that National Theatre of Scotland’s The Strange Undoing of Prudencia Hart would transfer from its off-Broadway haunt at the McKittrick Hotel to Woolfe Street with ease. There’s even a bar at the rear of the Woolfe, so the audience could self-lubricate in the same casual manner they did on W. 27th Street.

But somehow, it didn’t quite work. 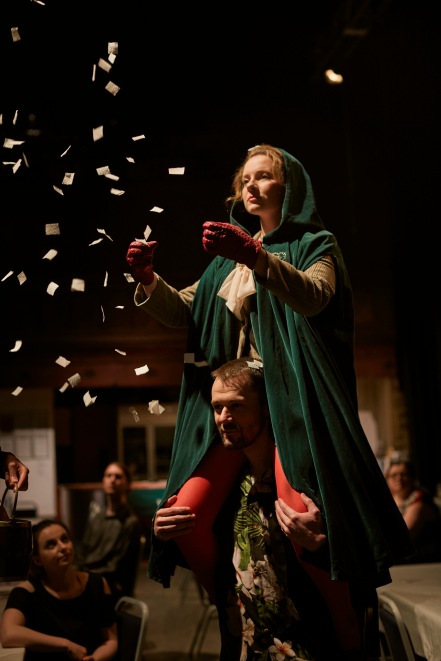 They did apply the cabaret treatment in Charleston, but in New York, the vibe had been more like an Irish pub with sturdy rough-cut tables for the audience. The cocktail tables were smaller, but the larger dimensions and the higher ceiling at the Woolfe conspired to make even Peter Hannah, who repeated his off-Broadway stint as Satan, less audible and intelligible. Worse yet, Melody Grove and her starchy, autumnal, spinsterish charms weren’t aboard for the reprise, replaced by the youthful Jessica Hardwick, who diluted all three of those dimensions.

Prudencia’s starchiness is rather complex because, in her musty academic field of folk ballad studies, she’s a retro romantic. David Grieg’s fanciful script, written substantially in retro rhymed couplets, compounds the complexity by portraying the trendy men who dominate the academic conference Prudencia attends, spouting all sorts of deconstructionist quibbles with the ballads’ sincerity and authenticity, as rather backward in their patronizing, lecherous attitudes toward women.

As a rebel against hidebound orthodoxy, Hardwick’s youth serves her well, but when a historic blizzard impacts the action, and the front door of an Airbnb turns out to be a gateway to Beelzebub and eternity, the poignant dimension that Grove brought to Prudencia – of a woman who has missed out on her life – gets buried. The snow, after all, is pieces of paper that the audience has shredded and tossed into the air, and the twilight zone where Pru departs overlooks a Costco parking lot. So comedy is muting the pathos of Prudencia’s strange undoing as well as the National Theatre’s spectacle – which includes a generous helping of bonny Scottish folksinging. At the critical moment that delivers her back to Costco, I missed the strong sense of Hardwick as a late-blooming flower in Hell.

For the second season in a row, I needed my wife Sue’s assistance in deciphering what Avital Lvova was saying onstage at Woolfe Street in a Henry Naylor drama. Last year, it was Angel, the story of the life and death of a Kurdish sharpshooter, where I was able to move closer to an empty seat near the stage and salvage some of Lvova’s performance. Lvova was back this year in Borders as another action hero, Nameless, a Syrian graffiti guerilla. No closer seats were available this time, so I struggled to comprehend even the basics of Nameless’s narrative as she lurked in a hoodie and thrashed on the floor in evasive actions.

Abandoned by her father, raised by Mom, encouraged and deployed by a paint store patron, ambiguous relationship with boyfriend, unwanted pregnancy, and flight to safety. That was the gist I was able to catch unassisted.

Thankfully, Naylor provides a second narrative that alternates with the Syrian graffiti artist’s – and ultimately converges with it in a fraction-of-a-second shutter snap. If Lvova is showing us the desperate primitive lives of the noblest people enmeshed in the perpetual turmoil of the Middle East, then Graham O’Mara as celebrity photographer Sebastian Nightingale mirrors both the commercialization by the West of that endless strife and our smug indifference to it.

O’Mara, pretty tall and glamorous himself, gave a stunning account of this LA slickster who’s occasionally afflicted by conscience and remorse, maybe just enough to add the gravitas of a three-day beard to his image. Listening to Sebastian’s account, particularly his climactic confrontation with a burnt-out photog who had persisted in Syria, I had a taste of what Naylor’s dramas could be if they were adequately cast.

Directed by Emma Rice, The Flying Lovers of Vitebsk started out by bringing a wisp of nostalgic cabaret ambiance to Dock Street Theatre – eminently appropriate, because Rice had starred in the original production over 25 years ago when she and her newlywed husband, playwright Daniel Jamieson, portrayed over-the-moon lovers Marc and Bella Chagall. Marc Antonin as the beloved painter, entered the darkened theater from the rear serenading us and his bashert – Daisy Maywood, rapturously awaiting him as Bella.

The Kneehigh and Bristol Old Vic remount of what Jamieson originally titled Birthday sported an ultra-versatile band that included James Gow and composer James Gow. Cementing its kinship with Kneehigh’s Tristan & Yseult, directed by Rice at Spoleto in 2006 with bushel baskets of old music, Sophia Crist designed a severely raked set of weathered wood with scaffolding that didn’t look strong enough to hang either of the principals. Like the Chagalls’ love, its survival looked dubious in a storm-tossed world. 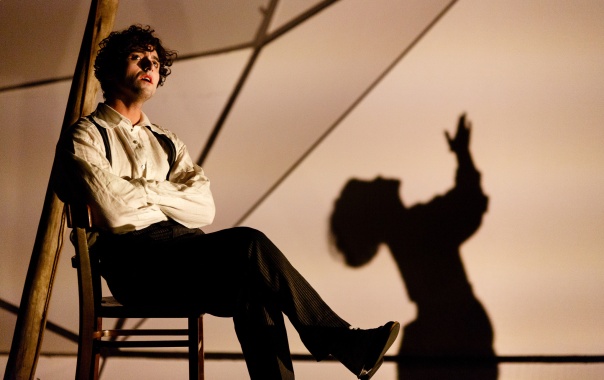 All that separates The Flying Lovers from ascending to the pinnacle of towering drama are length, conflict, complications, and plot. Instead, the blissful couple navigates upheavals that decimate their obscure hometown (ironically best known today as Chagall’s birthplace) and threaten to incinerate the Jewish people. Pogroms, the Russian Revolution, and the Holocaust toss the couple back and forth across Europe until they reach the safety of the US. More vividly than these obstacles, we remember the purity of the love that binds Marc and Bella together. This love helps them to soar above the troubles of our world – higher, they seem to levitate, because there are no plots or complications pulling them down.

Both Antonin and Maywood cavort like newlyweds, often replicating those endearing, impossible, gravity-defying poses that Chagall painted of his love. They also sing with that simple, intimate sincerity ushered in by microphones, radio, Crosby, early Sinatra, and Margaret Whiting. Then you realize what distinguishes Chagall’s best work. It’s not the invention of surrealism, which is disputable. It’s the way that joyful music is forever singing in the colors and the flowing design of his paintings.