Unless you were already aware that Fiona Ritchie’s widely syndicated radio show The Thistle & Shamrock originated at WFAE on the UNC Charlotte campus in 1981, you might have been surprised to see that Jamie Laval‘s “Celtic Christmas: Music and Stories for the Deep Midwinter“ attracted a capacity crowd at Booth Playhouse on Sunday evening. Yes, long before WFAE became mostly news and talk, Charlotte was the cradle of the most listened-to Celtic music program on earth. As a 2015 concert at the Aunt Stella Center showed – and the Booth sequel confirmed – Charlotte remains a hotbed of Celtic music fandom.

Sporting a kilt and sporran, Laval took fine advantage of the larger stage upstairs at the Blumenthal Performing Arts Center. While the champion fiddler didn’t bring the same dance artillery along with him as we saw at Aunt Stella, Laval’s production was greatly enhanced with the projections and lighting design by Michelle Fleming. Projections were also useful at the top of the program as Laval, his instrumental ensemble, and vocalist Megan McConnell cruised through the first three selections on the playlist – two of which were medleys – without pausing. Fleming’s ministrations in the light booth, changing the snowy midwinter scenes that projected behind the musicians, provided visual bookmarks at key transition points.

Onstage, Asheville-based Rosalind Buda was the most chameleonic of the instrumentalists, the only holdover in Laval’s ensemble from 2015. Buda switched from pennywhistle to bagpipes during “Da Day Dawn (Shetland Air),” from bassoon to recorder during the “Round About Our Coal Fire / Cornish Wassail” medley, and back to a bassoon continuo during the “Medieval Dance Carols / Patapan” potpourri. That gave us only a sampling of her varied capabilities.

McConnell was also notable for her versatility, traversing a range of languages during the concert in song lyrics that hopscotched from English to Cornish to Breton and to Galician as she exemplified the full spread of Celtic culture. The Galician of “Fum, Fum, Fum” just before intermission was especially eye-opening and arguably McConnell’s zestiest vocal: I was not expecting to hear Spanish at a Celtic concert! When the soprano retreated from her vocalist microphone, there was a percussion station with an assortment of cunning little devices, including a wood block, finger cymbals, glockenspiel, and Quebecois wooden spoons.

As the evening progressed, it became harder to overlook the versatility of Irish dancer Claire Shirey. When she wasn’t striving to replace the three dancers who had appeared with Laval in 2015, Shirey showed considerable expertise in playing the bodhrán, a Celtic drum. That seemed to be the full extent of Shirey’s range until the concluding “Jacobstowe Wassail / Reels” medley, when she brought a fiddle in from the wings and performed a duet interlude with Laval. When Laval fully took over the fiddling chores, Shirey deposited her violin offstage and returned, merrily adorned in silver spangled shoes that she put percussively to use, clacking away as the tempo accelerated. Nor were those the only fireworks in the finale, for in the wassail, McConnell and Buda hooked up in a lilting vocal duet in 3/4 time.

There was plenty of texture in the instrumental fabric throughout the evening, but the balance wasn’t always satisfying. Chronically undermiked, guitarist Eamon Sefton and cellist Franklin Keel were never really prominent in the tapestry. The same might have been said about Rachel Clemente and her Celtic harp, except that the harpist was showcased in both halves of the evening, playing glimmering preludes when Buda performed her poetry readings of “White Eyes” and “Snowbound.” Clemente was also the sole accompanist when the first of these poems transitioned to “Caleno,” a lovely McConnell-Buda vocal duet. When “Snowbound” dissolved into “Winter, Fire and Snow,” Clemente supplied a lyrical coda before McConnell alternated vocal stanzas with Laval’s instrumentals.

Amplification was most complex for Buda and her array of instruments. When she picked up the bombard – defined very unhelpfully by the Oxford Dictionary of Music as “a type of shawm” – for the first time on “Joyful Mysteries (Breton Carol and Dances),” Buda made a glorious sound, somewhat akin to Sidney Bechet’s storied jazz recordings, a robust soprano saxophone timbre with an extra Middle Eastern tinge. Later, when she switched from bombard to a smaller sopranino bombard (or shawm) midway through “Kanomp Nedeleg (Breton Carol and Dances),” there was only the slightest diminution in volume, for these ancient reed instruments hardly needed amplification. Nor did the riq, an Arabian tambourine that Buda would brandish in “Patapan” prior to the “Kentucky Wassail/Gloucestershire Wassail” medley – and after intermission, in the “Gower Wassail.” But Buda’s bassoon, banjo, and bagpipes weren’t as prominent as I would have liked. More disturbing, I strained to hear Buda when she read the poems, a problem that hadn’t plagued the 2015 concert.

Leaving his guitar behind on this visit, Laval was less conspicuous in his versatility, confining himself to violin, spoken intros, and some very effective narration in spinning the “Saban the Woodfitter” yarn, where we had our best taste of the bagpipes during Buda’s intro. For those of us who have overdosed on Christmas music, Laval’s opening description of his program reassured us that the emphasis would be on a solstice celebration – even if that message undercut his “Midwinter” subtitle and Fleming’s cavalcade of very snowy projections. Laval was especially charming in discoursing about Brittany, the bombard, and the folkloric significance of wrens for the Celts. 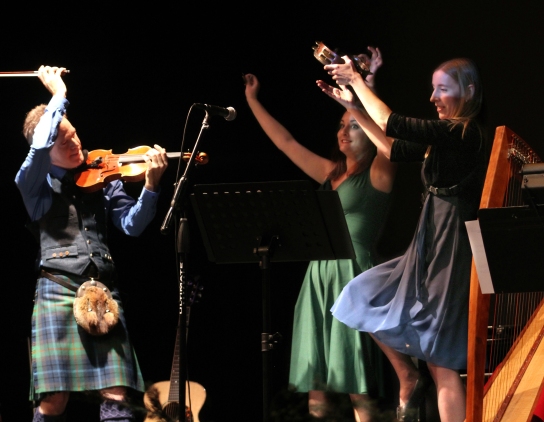 There was plenty of double-stopping and ricochet bowing from Laval throughout the evening, but his virtuosity peaked when he gave himself the solo spotlight for “Variations on ‘Deck the Halls.’“ There was a double-stopped variation in this bouquet, of course, followed by nods to Appalachian mountain fiddling, a pizzicato chorus, a Scottish bagpipe-like variation, a minor variation, a couple of reel segments, and a climax that shuttled between double-stopped and ricochet-bowed passages. As an artistic director, lest we forget that aspect of his artistry, Laval provided a surprisingly varied assortment of instrumental and vocal combinations. The evening was not so much a Christmas, or a solstice, or a midwinter celebration as it was a Celtic cornucopia.